Canaan is the hometown of Cid Haze in Final Fantasy III. At first, the Warriors of the Light cannot reach Canaan due to a large boulder blocking the way. It is located south of Castle Sasune and near Dragon's Peak. A revification spring can be found.

After healing Ms. Cid, the Warriors of the Light find Salina, a heartbroken girl who saw her relationship with Desch broken. This man also holds the last Mini spell from Canaan. For this reason, they head to Dragon's Peak as to find him.

After obtaining the Wheel of Time in Castle Argus, Cid is able to turn the Enterprise into an airship, and also tells the Warriors of the Light about their origin. Ten years before the current events, Cid was transporting passengers, his airship was engulfed by darkness and crashed. Then he found the Warriors of the Light and had them to be raised in the nearby towns.

Later, Cid warns the Warriors of the Light via Mognet that he has found a monster in his basement, and asks them to defeat it. After killing the Aeon, they find the Orichalcum, a rare ore that they had gained knowledge of thanks to the Legendary Smith.

"The Village of Ur"

The background music that plays in Canaan is "The Village of Ur". 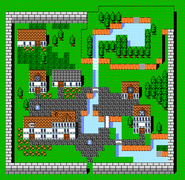 The town of Canaan (NES). 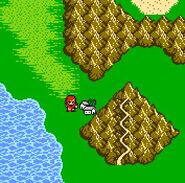 The town of Canaan on the World Map (NES).

[view · edit · purge]Canaan is the name of the land where the Biblical Hebrews settled, but left for Egypt during a famine. They returned there in the Exodus after forty years in the Sinai Desert. It is modern day Israel, Palestine and Lebanon.