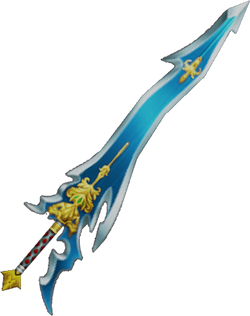 All who have brought the sun to this weapon have likely seen their fill of gulls.

Description, Final Fantasy All the Bravest.

Caladbolg (カラドボルグ, Karadoborugu?) is a recurring weapon in the Final Fantasy series. The Caladbolg is generally the ultimate weapon for Tidus, however in the original Japanese versions the weapon is called Ultima Weapon (アルテマウェポン, Arutema Wepon?).

The Caladbolg is Tidus's Celestial Weapon. It is acquired after beating the chocobo trainer in the Calm Lands, down a slope in the northwest section. It requires the Sun Crest and Sun Sigil to power it up to full, and when powered up it gains the abilities Break Damage Limit, Triple Overdrive, Evade & Counter, and Magic Counter. Like all Celestial Weapons it ignores target's Defense stat when calculating damage in addition to dealing more damage the closer Tidus is to his max HP.

The Caladbolg is the Empyrean great sword, which is obtained through the Trial of the Magians. It can be equipped by both Paladins and Dark Knights. However, because Paladins typically require the use of a shield to fulfill their role in battle, it is more common to see the Caladbolg wielded by a Dark Knight.

While the base stage of the weapon can be equipped as early as level 80, the level requirement for the Caladbolg increases as additional trials are completed and the weapon grows more powerful. At the level 85 stage, the Caladbolg allows the player to use the Torcleaver Weapon Skill which deals triple damage with a damage modifier based on the user's TP. At this level, the Caladbolg also gains an Aftermath effect, which causes the player to occasionally deal double damage for a short time after using Torcleaver. At its final level 99 stage, the Caladbolg gains an Afterglow effect. This causes nearby party members to receive a Critical Hit rate boost for a short time after the Caladbolg's wielder uses Torcleaver.

The Antiquated Caladbolg is a level 70 main arm for Samurai, obtained as part of their Artifact Equipment set after finishing their job quests. It is item level 290, has a Physical Damage rating of 93, and increases Strength +222, Vitality +225, Determination +242, and Tenacity +169, with two slots for materia melds.

The Caladbolg is Tidus's weapon when in EX Mode and has two EX Mode abilities related to it: "Caladbolg (ATK)" and "Caladbolg (DODGE)". The Caladbolg abilities boost the Bravery damage Tidus does depending on how much HP he has in relation to his max HP, doubling his Attack at full HP, and doubles the duration of invincibility during his dodges.

The Caladbolg returns as Tidus's EX Mode weapon with no new abilities, and unchanged effects of the ones introduced in the original Dissidia.

Final Fantasy All the Bravest
Add a photo to this gallery

[view · edit · purge]Caladbolg ("hard cleft"), sometimes written Caladcholg ("hard blade"), is the sword of Fergus mac Róich from the Ulster Cycle of Irish mythology. It was sometimes used in plural to mean "great swords", and might also refer to Excalibur. It appears in Welsh mythology. In some legends it is said to slice the tops off hills.

In the Japanese and other localized versions Caladbolg is actually the Final Fantasy X version of the recurring Ultima Weapon. [view · edit · purge]Ultima means "the last" in Latin and many Latin-based languages. In the Spanish versions of many Final Fantasy games, it is written as "Artema," a close transliteration of the Japanese katakana.