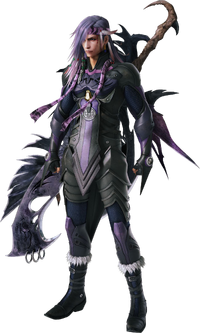 "Caius's Theme" (カイアスのテーマ, Kaiasu no Tēma?, lit. Theme of Caius) is a prominent theme from Final Fantasy XIII-2. It was composed by Naoshi Mizuta in 2011.

It is a dramatic orchestral piece with a Latin chorus. "Caius's Theme" had a hard time getting approval from the director of Final Fantasy XIII-2, and Mizuta created more than four different tracks, spending nearly a month on this one track.[1] The director wanted to make the song into something that could surpass Sephiroth's theme "One-Winged Angel" from Final Fantasy VII.

"Caius's Theme" is the leitmotif for main antagonist Caius Ballad. It represents his godlike status, as well as his grief and the tragic side to him. It first plays at Oerba -200 AF- during his confrontation with Noel Kreiss and Serah Farron, and during his fight with Serah at the Void Beyond.

"Caius's Theme" is a prominent motif and has several arrangements: "Chaotic Guardian" plays during Caius's appearance at Academia -400 AF- and during his battle with Noel in the Dying World -700 AF-; "Heart of Chaos" plays during the last battle against Caius in Valhalla; and the final boss theme, "Unseen Abyss", plays during the final battle.

"Caius's Theme" is also included in "Promise to the Future", "Endless Paradox", and the "Closing Credits".

"Caius's Theme" plays when he appears to Lightning in the Temple of the Goddess in the Wildlands. The theme is incorporated into the final boss theme, "Almighty Bhunivelze", and the ending theme, "Credits ~Light Eternal~". "Chaotic Guardian" is used during Lightning's battle against him, with "Heart of Chaos" replacing it after he is staggered at low HP. "Unseen Abyss" will play once Ereshkigal is staggered at low HP. Finally, a variation of his theme is used in "The Doomed Soul -Caius and Yeul-" during the cutscene following the battle.

"Heart of Chaos" appears as one of the newly added Battle Music Sequences for Final Fantasy XIII-2.