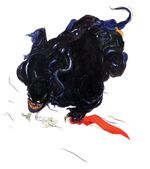 One of Golbez's elemental archfiends, the Drowned King, archfiend of water.

Cagnazzo (カイナッツォ, Kainattso?) is a recurring character in the Final Fantasy series. First appearing as a minor antagonist, he is a fiend associated with the element of Water. He takes the appearance of a large demonic turtle-like creature. He is a demonic sentient monster, and part of the Archfiends.

Cagnazzo appears in the Dawn of Souls and subsequent remakes as a boss at the 5th floor of the Hellfire Chasm, one of the bonus dungeons for the remakes. When defeated, he drops a Light Curtain.

I am the Drowned King, Cagnazzo - Archfiend of Water and sworn servant of Golbez! Bow down before me!

Cagnazzo (also known as Kainazzo) is a boss and one of Golbez's Archfiends, titled the Drowned King. In the 3D version, Cagnazzo is voiced by Takeshi Aono in Japanese and Michael McConnohie in English.

Cagnazzo killed the King of Baron and took his place to have the Red Wings invade Mysidia to steal their Crystal of Water. Cecil Harvey and the other residents of Baron began to notice the king acting strangely.

Upon being questioned on the attack on Mysidia, the "king" discharges Cecil from his post as captain of the Red Wings, and orders him and Kain Highwind to slay the Eidolon guarding the Mist Valley, and to deliver the Carnelian Signet to the village of Mist. Once Cecil refuses to follow the "King's" order after learning the truth behind the ring, Cagnazzo orders Baigan and his forces to exterminate him while Golbez and the Red Wings pursue the remaining crystals.

After Cecil becomes a Paladin, he returns to Baron to find Cid Pollendina and ask about his newest airship. Since Cid refused to let Cagnazzo use the new airship, the Enterprise, the fiend threw Cid in prison. Cecil, along with Tellah, Yang, Palom, and Porom, visit the "King" to inquire about this.

When Cagnazzo sees that Cecil has become a Paladin, he is upset, preferring a Dark Knight over a Paladin. The fake king then reveals himself as Cagnazzo and battles them. Cecil's party defeats him. When Cecil and his friends escape with Cid, Cagnazzo uses the last of his power to bewitch the antechamber, trapping his killers as the walls cave in on them. Palom and Porom petrify themselves to hold the walls back.

Main article: Cagnazzo (The After Years)

Cagnazzo appears as a boss. When he is defeated he is glad to return to his sleep. If Golbez is in the party, he wishes him peace as they may share the same hell. Cagnazzo is joyous in seeing Golbez again, claiming it an honor, but is unable to finish his sentiment before passing on. A Sage's Staff and Sage's Robe are given after his defeat. 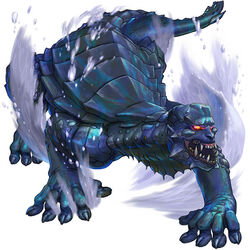 Cagnazzo is a water-elemental summon. His special attack is Hydro Wave, which deals water-elemental damage to one enemy. Cagnazzo's ability buffs all players with protect, regeneration and reflect.

Cagnazzo allows the wielder to use the following abilities: 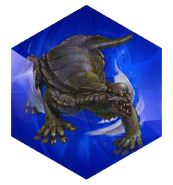 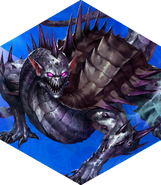 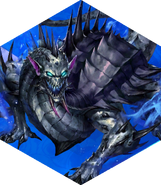 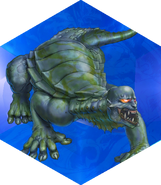 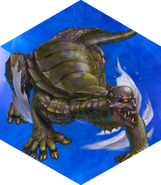 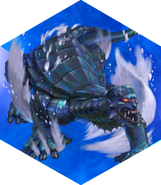 Cagnazzo is a summon summoned as a counter to an opponent's summon who fixes the opponent's Bravery. His original artwork from Final Fantasy IV is used.

Cagnazzo can be obtained on the second stage of the Shade Impulse II storyline. The lines Cagnazzo delivers when the player obtains his manual form in Shade Impulse II is taken almost directly from his lines just after his death in Final Fantasy IV, except directed at whoever the summoner's enemies would be.

Like the other Archfiends, Cagnazzo serves as a "counter" version of one of the original Final Fantasy's Four Fiends, who work on a timer. Specifically, Cagnazzo's Deluge works like Marilith's Flame Arcana; both freeze the opponent's Brave. Both are the second "Fiend" encountered in their respective game (although it is possible to postpone the encounter with Marilith in Final Fantasy, it is not the intended course of action).

There is also a piece of armor bearing his name: "Cagnazzo's Carapace".

Cagnazzo has the same function that he has in Dissidia Final Fantasy. He can be purchased from certain Moogle Shops for 100 KP. The equipment referencing him also returns.

Cagnazzo also appears as a tutor for the Labyrinth feature at the in-game manuals.

Spewing ooze all about, Cagnazzo keeps his eyes fixed on his prey. In Baron, he murdered the king and took his place to further the hunt for the Crystals. Facing him means facing the depths of death.

Cagnazzo appears in the rhythm game along with the other elemental archfiends.

Cagnazzo appears as an enemy in Battle Music Sequences.

Cagnazzo from Final Fantasy IV appears as an enemy.

Cagnazzo appears as a boss.

Cagnazzo from Final Fantasy IV appears as an enemy. He is the second of two bosses and the final boss of the Record of Castle Baron.

The player should ready Ice and Thunder attacks, as Cagnazzo is weak against one or the other dependent upon his pose. Assuming few charges were spent in the battle with Baigan, the player could walk from the battle unscathed by spamming Blizzard spells. When water surges beneath his feet, the player should advance to a Black Mage's turn and allow him/her to cast Thunder on Cagnazzo; this nulls the Tsunami that usually follows. When his HP falls to critical, Cagnazzo takes to his shell to recoup HP. The player should keep the pressure on with speedy attackers and spellcasters, and Cagnazzo will fall.

Defeating him in Elite mode with a Bonus Quest activated unlocked the Paladin Cecil.

"You've returned at last! And all the stronger for your journey, by the looks of it." HAH! Did you fall for that, truly?

Cagnazzo is a character and summonable vision. His job is listed as Elemental Archfiend.

Cagnazzo's stats at his highest levels are as follows (with no passive abilities taken into account), along with the maximum amount of stat points that can be increased through pot-enhancements:

He can equip the following armors: helms, light armors and heavy armors. 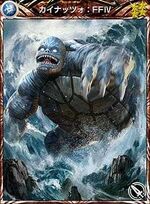 A parody of Cagnazzo from Final Fantasy IV makes an appearance in the 4th chapter along with the other Archfiends. The chapter number they appear in alludes to the number 4, their game's origin. The seasons have been stolen, and by defeating the Four Archfiends will return the seasons. They each have a castle, and are located on the four corners of the map. Winazzo (ウィナッツォ, Ūinattsuō?), the Fiend of Winter is found in the southeast castle.

With power over the world's waters, this Elemental Archfiend summons tidal waves and floods to bring ruin at his will.

Cagnazzo along with Scarmiglione, Rubicante, and Barbariccia, are all promotional cards, all of whom were special captures to celebrate the release of Final Fantasy IV for the Apple iPad. All of them are Rank 5 (the rarest), with Cagnazzo being a Giant-type Guardian that would have been found in the Berneside Plains. 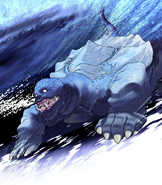 [view · edit · purge]Cagnazzo is a demon in the Inferno of Dante's Divine Comedy. He is one of the 13 Malebranche ("Evil Claws") who guard Bolgia Five of the eighth circle of Hell, Malebolge. Vulgar and quarrelsome, their duty is to force the corrupt politicians to stay under the surface of a boiling lake of pitch.

"Kainazzo" is a phonetic spelling of the kana in the character's Japanese name, and was likely rendered that way due to the translator of the time missing the Divine Comedy reference.