The oldest living l'Cie in Orience, Lady Caetuna is a legendary summoner who has served the Vermilion Bird Crystal for centuries. Records show that she participated in the Great Orience War some 500 years ago, and her manner of speech is, fittingly, quite antiquated and equivocal. Lady Caetuna essentially speaks in riddles, so few are able to decipher what she means to say.

Caetuna [sɛðʉnɑː] is a supporting character from Final Fantasy Type-0 who also appears in Final Fantasy Agito and Final Fantasy Awakening. She is a Vermilion Bird Secundus l'Cie excelling at summon magic, and it is said that she can call any Eidolon as well as control thousands of them simultaneously. In all of Orience, she is the most senior l'Cie, and her name appears in records of a world war five-hundred years past. Due to her preferring to distance herself from the plights of humans and moving under the cover of darkness, Caetuna is described as the shadow of the Vermilion Bird Crystal in juxtaposition to Lord Zhuyu, who is said to be its shining flame.

Caetuna has red wavy hair she keeps pinned up but for her bangs and few locks of hair that frame her face. She wears a long earth-tone dress with elements of Dominion of Rubrum military gear, with a plate of armor covering her abdomen and lower rib-cage. She wears a red cape, and wields a red lacquered tanto accentuated with a small purse. According to the Rubicus, her age is unknown, and she is 5'8" tall.

Caetuna's speech style is archaic and she speaks in riddles. She submits to the Will of the Crystal and accepts her role as its puppet. She is always calm and composed, having been sapped of her mortal emotions during her long life as a l'Cie. Though usually indifferent to normal humans, she sometimes shows compassion to them, such as when she advises Rem Tokimiya.

The novel tells the events of the cycle that took place just before the final cycle as depicted in the game. Lady Caetuna was sublimated alongside Lord Zhuyu when Milites attacked Akademeia with MA outfitted with Ultima Bombs. She summoned various Eidolons to defend the Peristylium and crystallized with a smile on her face.

When Class Zero is infiltrating the imperial magitek facility to destroy their prototype MA, Caetuna and Zhuyu meet in the Vermilion Bird crystal room, the latter remarking they haven't seen each other in a long time. Caetuna implores Zhuyu that something is about to happen, and that the two of them are mere puppets to a greater will. The Crystal begins to shine, and far away in the imperial capital of Ingram Queen Andoria invokes the Fabula Pact, a peace agreement made between the four peristylia of Orience that grants a short-lived ceasefire that comes to an end as the queen is assassinated. Her successor, the King of Concordia, allies with the empire and relinquishes the Azure Dragon Crystal to Marshal Cid Aulstyne's "protection."

As all other Crystals of Orience have now been subjugated by the empire that has developed a machine to enslave them and thus, their l'Cie, the Vermilion Bird Crystal tasks Lord Zhuyu and Lady Caetuna with its protection. Caetuna informs Chancellor Khalia Chival VI that she will summon a Verboten Eidolon to annihilate Rubrum's enemies should the Militesi-Concordian coalition attempt to invade Rubrum.

Central Command prepares for the upcoming showdown with a plan is to send Class Zero with Lord Zhuyu to fight off the Concordian dragons with an airship fleet, and send the rest of Rubrum's legionaries, and Akademeia Agito Cadets and trainees, to the Militesi border for Lady Caetuna to summon a Verboten Eidolon. Two l'Cie taking part in Rubrum's military operations simultaneously is unheard of, and many see it as a sign of the dominion's, and thus the Vermilion Bird Crystal's, desperation.

Caetuna runs into Rem Tokimiya from Class Zero in Akademeia, and the latter is flustered to be addressed by a l'Cie. Caetuna asks if Rem values serving the Crystal above all else, and she enthusiastically confirms. Caetuna can tell there is something Rem holds even dearer than the Crystal, and says as much, confusing her. Caetuna implores Rem to leave the dominion should she wish to protect the thing she loves most, but then shrugs that it may be of no consequence to mortals and leaves.

The dominion forces engage Milites on the western front, but the imperial numbers are greater and the dominion forces fall back. The empire deploys a crystal jammer to the area cutting off the dominion forces from their Crystal, including Caetuna, who can't summon Alexander under the jammer's influence. Class Zero, whose cadets can wield magic independent of the Vermilion Bird Crystal thanks to being augmented by the dominion archsorceress Arecia Al-Rashia, take down the jammer. Caetuna uses the phantoma of Kurasame and the students of Akademeia to summon the Verboten Eidolon Alexander who decimates the Militesi army in their borders, securing victory for Rubrum.

Suffering from overexertion, Caetuna proclaims victory over the empire. She collapses and takes one final look behind her to see Kurasame dying and the cadets fallen behind him. Caetuna senses the Crystal's Will and submits herself to it, entering crystal stasis. She shatters into pieces, strongly implying her leave of the mortal world. News of her sublimation are delivered to the chancellor who orders for her crystal to be retrieved and preserved in the catacombs. A memorial ground is built, dedicated to those who had died in the war, including Caetuna.

Caetuna is playable in Final Fantasy Awakening. She can unleash a hailstorm to slow down enemies and heal either a single ally or everyone's HP. This is more effective than Machina's skills, who can only heal a single ally. Caetuna can regenerate everyone's HP when she is the team leader. Her strongest skill is to temporarily freeze her opponents allowing others to attack them, or crush them into dust when the enemy's HP is critical. When teaming up with Zhuyu, the Shin version of her strongest skill takes more damage as well as wiping out the player. She is mostly used by online players in the Arena, Thrones of Paragon, Samsara Realm and Battle of the Kings, and in later chapters. In various events when the player almost reaches in Unique stage, or the highest combat power, Caetuna is difficult to defeat due to her high defense, strong healing skills, and strongest skill, which can quickly wipe out her opponents, especially since her limit bar refills after using it.

In World Boss, a stronger Caetuna is fought alongside Zhuyu, Gilgamesh and Nimbus. Her special skills are augmented when she damages her opponents and also briefly freezes them. When she unleashes a hailstorm, she creates two giant tornadoes, stronger than one of Kurasame's skills. Her strongest skill can quickly wipe out everyone.

In the Augite System, she will have another form named Ventuses, and appears stronger and focuses on using Thunder magic. Her strongest skill deals powerful lightning damage that seal her opponents and also heals her allies' heavy HP. Ventuses' healing abilities are much stronger and effective than Caetuna's during the usage of her strongest skill.

When Caetuna is about to be put into crystal stasis before the crystal itself shatters, Caetuna summons her core weapon in a flash of blue light to transform into Ventuses.

Caetuna was designed by Roberto Ferrari.

In Final Fantasy Type-0 HD, Caetuna is voiced by Marina Inoue in the Japanese version.

In the English version, she is voiced by Erin Cotrell. 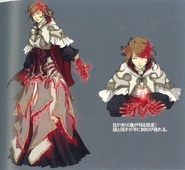 Concept sketches of Caetuna and her dagger.

Caetuna and Zhuyu having a chat.

Caetuna's name is written in Japanese as (セツナ, Setsuna?); [view · edit · purge]Setsuna means "moment" in Japanese. Her name is officially romanized as Caetuna, though pronounced as Setsuna.