Cactuar is an enemy in Final Fantasy VIII, located in Kashkabald Desert and primarily on Cactuar Island.

Though Cactuar Island is inaccessible prior to obtaining the Ragnarok, a small portion of Kashkabald Desert is part of the Cactuar Island region. To reach this area of the world map, one must pilot Balamb Garden to a small gap in the mountain range surrounding the south of the desert and proceed on foot.

A speedy cactus of the desert. Damage always amounts to 1,000 units with its special skill, 1,000 Needles.

-If Cactuar escapes, no AP, EXP or dropped items will be yielded.

Cactuar's have low HP, Strength, and Speed, which are offset by them having very high Spirit and Evasion, and their Vitality skyrockets at higher levels. Additionally, they have a high chance of fleeing the battle before the party can even act, and their 1000 Needles attack disregards evasion and deals fixed damage, ignoring status effects such as Protect and Defend. If defeated, Cactuars grant 20 AP, making them good prey for learning new GF abilities.

Cactuar is one of the few non-boss monsters that is unaffected by Quistis's Degenerator Limit Break, Selphie's Rapture and Odin never appears against it. The others are Grat, Vysage, Lefty, Righty, Tonberry, Esthar Soldier (Terminator), UFO? and PuPu.

Cactuars are very weak against Water, so casting Water spells or summoning Leviathan with high compatibility will bypass their high Evasion. Squall's 255% accuracy guarantees him a hit, allowing a Cactuar's much more manageable Vitality to take effect. Selphie is the only other character who can attain a natural 255% accuracy with her Strange Vision ultimate weapon. Other characters can boost their accuracy with junctions and junction water spells to attacks.

The Initiative ability lets the user start the battle with a full ATB gauge. One strategic setup is junctioning Initiative to Squall, Irvine, or Quistis and have them use Limit Breaks that damage all enemies, i.e. Fated Circle, Scatter Shot, or Ultra Waves, as Limit Breaks never miss. Equipping the Alert ability and lowering battle speed can also help.

Cactuar is a Level 3 Monster Card in Triple Triad used for playing the minigame and for turning into Cactus Thorn with Quezacotl's Card Mod.

Cactuar is one of Boko's friends and assists him on his quest to find MiniMog, and later on in his quest to save Koko. He helps by finding items for them to use throughout the game.

Cactuar appears as an Earth-elemental card. 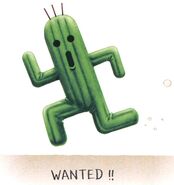