The Cactuar is an enemy in Final Fantasy VII, found in the Corel Prison desert. It is quite rare, confined to this one desert area, and comprising only 1/16 of the encounters there; the other 15/16 being Land Worms. It is evasive and tends to run away, but if the party manages to defeat it, they get a bountiful gil reward.

There is also a similar enemy, called Cactuer, found in Cactus Island.

-Abilities whose names are not shown when used are highlighted in italics.
-When attacking the Cactuar physically there is an 87.5% chance that its Evasion will be 255, resulting in a miss.
*The Cactuar will never use this ability.

The Cactuar only uses a physical attack; it has, but never uses, its 1000 Needles attack, making it far less dangerous than the Cactuer. It is elusive with a high Evade and is immune to most elements. It tends to run away after three turns, leaving the player with nothing.

When defeated, the Cactuar drops 10,000 gil, making it a desirable enemy to fight. Its EXP to AP ratios are the lowest in the game until the Goblins when the Highwind is obtained; its EXP to gil ratios, until the Mover enemies of the Northern Cave. Low-level challenges usually eschew expensive Materia, but the Cactuar makes them more accessible. The Cactuar's low encounter rate eats up a lot of time, making it less desirable for speed runs.

Choco/Mog and Matra Magic are useful, being the only abilities the player has at this point in the game that are both magical and non-elemental. L4 Suicide will cause damage, but will not be able to kill a Cactuar outright as Matra Magic can, nor reduce its damage output, as the Cactuar is immune to the Small status. Grenade is also effective. 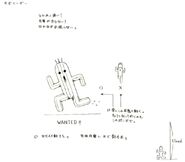