Cúchulainn is an Esper boss in Final Fantasy XII fought in the middle of the Garamsythe Waterway. Defeating him unlocks his license on the License Board. Cúchulainn is also fought in the Zodiac versions' Trial Mode at Stage 42 along with four Foobars. In this battle, accessories can be stolen from him: Cameo Belt (common), Indigo Pendant (uncommon) and Hermes Sandals (rare). HP is continually being sapped in both battles.

The player must complete the Wraith and White Mousse Hunts to get the control of the sluice gates in Garamsythe Waterway. From the first central area, with the save crystal, the player should see four sluice gate switches: 3rd, 4th, 10th, and 11th area.

The steps to accessing the area where Cúchulainn is are as follows:

Cúchulainn is accompanied by Foobars. While the Foobars respawn, killing a certain number of them will eventually cull their regeneration. The battle's special attribute is that health is constantly drained from all active party members.

Cúchulainn routinely casts Bio and Malaise, which may KO weaker characters. He also uses Impure to inflict Disable and Immobilize. The battlefield is small, so even Immobilized characters can reach a target most of the time. He also casts Invert, swapping the target's HP with their MP. If Cúchulainn uses Invert to a character with low MP, the constant HP drain will quickly finish them off. However, as Invert tends to replenish a character's MP stock, it may even be useful.

The main threat to the party is Disablega, fatal if it hits all members.

While standing near the save crystal in the Central Waterway Control the player should buff the party with Regen, Haste, Protect, and Shell. One may also want to set up gambits to recast Regen, Haste, and Shell as they wear off. It is best to not use Bubble, as the battle arena's HP Sap is based on a percentage of max HP; if Cúchulainn inverts a character, the last bit of HP saps at twice the speed if they have Bubble. The party's tanks can be buffed with Bravery and Berserk and mages with Faith.

If one tries to complete this battle with a guest character like Larsa, using the gambit Ally:any > Phoenix Down/Raise may be counterproductive, as the character will likely be KO'd early in the battle and soon after being revived.

Because the battlefield's drain effect is faster than Sap and can kill characters, the player must consider the value of curative gambits. If all the characters constantly heal to keep their HP topped off yet still struggle, it may be worth disabling usual curative gambits to rely on Arise―if it is available―to free up time and attempt to end the battle quickly as Cúchulainn's HP is not overly high. Phoenix Downs can also be used, and perform better with Phoenix Lores and the Pheasant Netsuke accessory. If one wants to avoid KO, it is important to keep HP above 1,000. Having Curaja is useful for this.

Killing Foobars should be the first priority either by means of Quickening Concurrences, or by directly attacking. To counter Disable and Immobilize, the appropriate anti-status accessories can be equipped when the Impure begins to cast.

When Cúchulainn begins casting Disablega, one should equip Black Belts for protection if not equipped already, or cast Esuna to remove the effect.

Cúchulainn appears on a stamp for multiplayer mode. 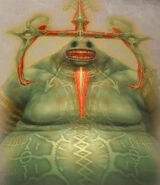 Cúchulainn as he appears before the party. 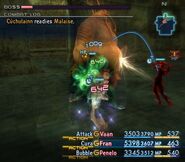 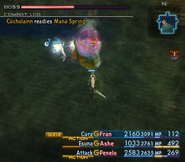