The bypass event glitch is a bug that can be used to bypass certain scripted events. 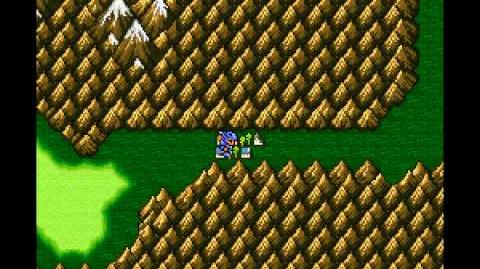 While moving on the world map in the SNES version, if the player presses

very quickly, the player can enter the menu while the character is mid-transition. If the player then uses a Tent, the game's collision detection is off by a tile by the time normal gameplay resumes. Then, if the player saves the game and resets it, the game's collision detection will be off by another tile, allowing the player to bypass the town of Mist altogether. With this glitch, it is possible to avoid visiting the town of Mist when Cecil and Kain are meant to deliver a package there at the beginning of the game. By skipping Mist Kain does not leave the party and Cecil never meets Rydia.

If the player continues to the desert town of Kaipo where Cecil is supposed to take the unconscious Rydia, the event where Cecil takes her to the inn still happens with Rydia appearing out of nowhere. During the night soldiers enter the town and Cecil fends them off, only now Kain is also in the party. If the player returns to Mist, they can find Rydia's mother lying on the ground motionless, but there is nothing they can do with her, as the Mist event does not trigger when entering the town from the right side. Mist's weapon shop is open and sells advanced weapons the player is not meant to obtain yet. If the player exits Mist and reenters from the left side, the event where Mist is burned down by Cecil and Kain's package triggers, but Rydia is already in the party, leading to a battle where Rydia effectively fights herself.

If the player never triggers the event in Mist, but heads for the Underground Waterway to find the cure for Rosa, Tellah, who is supposed to meet Cecil and Rydia in the cave, is not there and never joins the party, but will still appear in cutscenes. After the party makes its way to Damcyan Tellah is meant to battle Edward, but when the game tries to load the battle it freezes.

If the player uses the bypass glitch to bypass the event where the Red Wings attack Damcyan (by offsetting the game's collision detection by a tile and walking through the mountains), Damcyan appears normal on the world map, but is still in a ruined state if the player enters it and it goes on to trigger the scene with Tellah and Edward, freezing the game.

Much like Mist from Final Fantasy IV, Quelb in the second world can be skipped in the same manner. The glitch is harmful since it only works in one direction; if the player never opened the gates, they'll be stuck on the other side of Quelb.

The bug is activated by opening the main menu and pressing forward (or the direction the player wants to go); this results in bypassing solid "obstacles" that one isn't normally able to pass, including tiles which would trigger events when walked over. 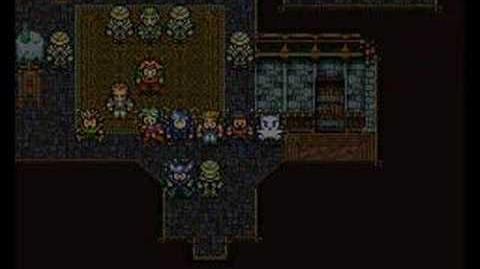 The South Figaro glitch, also known as the Moghan glitch or the Kutan glitch, is the most famous instance of a bypass glitch in the game. It can cause a number of undesirable effects, the most notable being Celes being replaced by the moogle Moghan, one of the ten moogles from earlier in the game when Locke protected Terra.

The glitch can be activated in Locke's scenario in South Figaro. The player must follow the soldier until he reaches the end of his path. The player should leave one tile in between Locke and the soldier and wait until the soldier is about to move down towards Locke, then open and close the menu quickly and move forward. If done correctly, Locke and the soldier will be standing on the same tile allowing Locke to bypass the soldier on the right side of the town and exit without meeting Celes. Locke will have to go through the Figaro Cave solo, but during the Narshe battle sequence, Celes's slot will be filled in by Moghan. During the Opera House scene, Moghan is unequipped and given Celes's sprite afterward. Moghan is a worthless party member, unable to equip espers or other equipment, and has low stats with no unique skills.

Using this glitch allows Locke to retain one of his alternate costumes from this scenario; while certain cutscenes may show him with his regular sprite, he can remain a green imperial cadet or a merchant for the rest of the game. It is possible to keep these costumes while still getting Celes by witnessing the scene in the basement where Celes is introduced, then leaving South Figaro without rescuing her. In fact, it is possible to turn Moghan into Celes after the scenario by returning to South Figaro and triggering this scene, which will still play even after the scenario is completed.

As a practical purpose, the player can skip sneaking about town in disguise using this glitch—the secret passage out of town will still open for Locke, so once the soldier is bypassed, the player can go through the passage backwards to the basement (in the process, passing through the cabinet that is removed by turning the clock key) and rescue Celes, then go back out and proceed through the scenario normally.

If the player skips town like this, later in the game after South Figaro has been liberated, returning to the town will allow the player to encounter a leftover merchant in the basement of the pub. The merchant will attack as he would during the scenario, and Locke can still steal his clothing and change his sprite appropriately. The player can remove the merchant outfit by going through the basement to the spot where they are prompted to remove Locke's disguise or not, but the merchant will not respawn. Also, returning to the spot where Locke would normally encounter Celes will freeze the game. Hence, if the treasures after the clock key room were not taken during Locke's scenario, the player must wait until the World of Ruin as it will not be possible to enter from the rear of the house.

The same effect can also be triggered by using the airship glitch to skip Locke's scenario. Depending on when this glitch is performed, other characters will also be replaced by moogles, such as Edgar (replaced by Moggie), Cyan (Moglin), Sabin (Molulu) and Gau (Mugmug). Unlike most bugs, this glitch was not fixed in the Advance re-release.

The Thamasa-Leo glitch is a conjectural name for another instance of the bypass event glitch, referring to the area and character involved.

To bypass the soldier in Magitek Armor on the left side or south side of the town, the player must stand before him and open the main menu. Before closing the menu, they should press in the direction of the obstacle and Leo will pass over the soldier. Unfortunately, the Thamasa map is a slightly different map from the regular Thamasa map, and doesn't have any exits, so Leo cannot leave this map. Even so, this allows the player to skip the Guardian event; however, if Leo tries to leave Thamasa normally, the event will still trigger.

Inferno glitch is a third instance of the bypass event glitch to bypass Inferno in Kefka's Tower. The player will have to press

just before reaching the tile that triggers Inferno's decent on the player, press

to enter the main menu, and then press 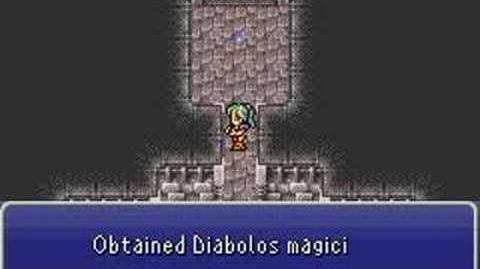 The Kaiser Dragon glitch is a fourth instance of the bypass event glitch in the Advance version of Final Fantasy VI.

As with the previous methods, the player should stand before the Kaiser Dragon and enter the main menu while having Auto-Dash or the Sprint Shoes on. Holding

while exiting the main menu will cause the party to pass by the Kaiser Dragon without fighting it. 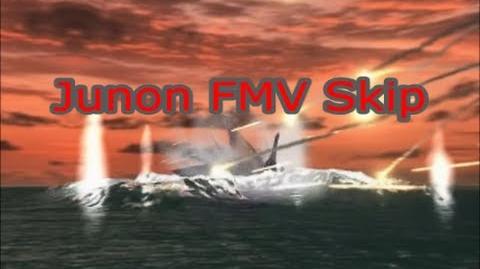 It is possible to skip the entirety of the Sector 5 Reactor and Air Buster fight, as well as recruiting Aeris scenes via a bug in the coding of the Sector 7 Slums guards. Normally, it is not possible to pass the guards south of the pillar, but through a series of pixel-perfect movements it is possible to bypass them, leading to Sector 6 slums park. Heading east enters Wall Market and starts the events there with a Level 1 Aeris (named "Aerith") in Cloud's party. However, heading to the Sector 5 slums church puts the player in a soft lock, as the game unloads the cutscenes in reverse, and loads the player in the wrong spot during the meeting cutscene, making it impossible to move. If this is done before Tifa joins the party, the player never gets the Materia tutorial and thus the Materia menu command.

The player can skip the events of returning to Midgar in Part II, and thus avoid many boss battles. As the skipped locations are unrevisitable, doing the glitch will have the player miss out on many good treasures. Usually during cutscenes all movement is prohibited, but there are some exceptions where, if the player presses the movement buttons during the scenes, the game considers the player to be moving to a new location, and starts another scene, letting the player skip various areas.

A similar glitch to the Midgar skip, though smaller in scale, can be performed in Junon, where the player can skip some FMVs and other story scenes.

There are multiple shops in the game for consumable items. The player can actually buy 0 of these items for 0 GP. If the player use the 0 of these item, they will get 255 out of it. Doing this will come with a little side-effect, the player will underflow the slot to the right of it, flowing it to the item value before that. For example;

Slot 1 has 0 Seeds and the player has 5 Cure Potions in Slot 2. The player use the 0 Seeds. The 5 Cure Potions will transform into 5 Sky Coins. Unfortunately, these Sky Coins are "fake" and they don't function as the Sky Coin the player receives. They can be used, but they do nothing or they will soft-lock the game if the player is in battle. Why the player would want to have them in their inventory is to "block" the Slot for Cure Potions, since that will enable the player to continue the underflow even further.

If there's Seeds, Sky Coins, Refreshers, and Heal Potions in the first row, the player will notice that Cure Potions won't fit anywhere on the first row. So if they go and buy some Cure Potions, the game will put them in Slot 5, which will affect all of the player's Key Items depending on how much Cure Potions they found or buy.

This glitch can be used to buy 19 Cure Potions and get the "real" Sun Coin, Sky Coin, and Mobius Crest. This can be done as soon as the player arrives in Fireburg, doing so will allow the player to skip the entire Fireburg region. Once the player is done with the glitch, they can leave Fireburg and return to the Focus Tower and unlock the door to proceed into the Windia region. Doing this, the clouds looming over the Windia region will not clear away.

to retreat inside the Talon with careful timing, it is possible to move into the barrier surrounding Mt. Goht one square at a time with only the Hover unit. Not only does this allow the player to skip much of the game, which includes the Underworld, but the trick can be used to beat the game with Dion: the player must simply perform the trick before rejoining with him, defeat Agron (causing Dion to leave the party, even though he is not actually present; Faye will be the one who leaves the party instead) and then acquire Dion by going to Porle. This will cause the player to lose Borgin.