Byblos is a boss in Final Fantasy V. He attacks the party in the Library of the Ancients just before they talk to Mid.
See also: Byblos (enemy)

Byblos inflicts many status ailments, particularly confusion, but he also drains the party's MP with Magic Hammer and halves their level with Discord. He will occasionally counter physical attacks by casting Protect on himself, and counters magical attacks with casting Toad on the party.

The party should not attack him when Byblos is at low HP, unless they can deal more damage than he gains by countering with Drain. A Black Mage and Mystic Knight should rely on Fira and other similar abilities to exploit his weakness to Fire magic. Summoning Ifrit is not recommended; although it deals a lot of damage, Byblos will counter by casting Toad and Confuse.

A safe, quick and easy way to win is to use the Blue Magic spell Death Claw to take him down to single digits. Obtaining a Flame Rod from Karnak and using it as an item should also defeat him quickly.

Byblos can be one-hit killed by using a Beastmaster to catch and release a Page 32, which will use Banish on Byblos.

Byblos appears as a playable character.

Byblos appears as the second boss of The Great Gubal Library in the Final Fantasy XIV: Heavensward expansion.

Byblos appears with an ice-elemental card. 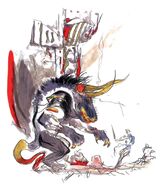 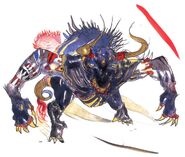 Retrieved from "https://finalfantasy.fandom.com/wiki/Byblos_(Final_Fantasy_V)?oldid=3276411"
Community content is available under CC-BY-SA unless otherwise noted.