Bushido techniques take time to master. New ones will be learned over time.

Bushido, also known as SwdTech,[1][2] is Cyan's special ability in Final Fantasy VI. It allows him to unleash a powerful sword technique based on how long Cyan charges up the tehcnique before unleashing it.

Learning all Bushido abilities in the 2014 version yields the Sword Master achievement.

Bushido abilities are used by waiting for a numbered gauge to fill up to a number from one to eight. The longer the wait, the stronger the Bushido attack will be. In versions of the game from 2014 onward, the player can outright choose the Bushido level and Cyan will charge his Bushido in the background, allowing the others to act during the wait. In the previous versions, the player must wait for a technique to charge before issuing commands to others; however, Umaro can act during Cyan's Bushido techniques, while Gau and Mog can act with Rage and Dance.

Cyan can only use Bushido if he is equipped with a weapon that is Bushido-compatible, but since almost all of the weapons Cyan can equip are Bushido-compatible (the sole exception being the Impartisan), this is rarely an issue; only when Gogo uses Bushido, or if Cyan is equipped with a Merit Award and a weapon that does not enable Bushido, such as Ultima Weapon, does one have to worry about equipping the right weapon.

Cyan learns new abilities as he levels up, and he will automatically learn all of them after the player completes the Dreamscape in the World of Ruin. Bushido have a set battle power or spell power, and do not change in effectiveness depending on the strength of Cyan's weapon. Neither having the haste status nor increasing Cyan's Speed stat through magicite or equipment will speed up the rate at which the gauge fills.

Cyan uses his Bushido techniques in his other appearances since Final Fantasy VI. Namely, in Dissidia Final Fantasy Opera Omnia, Cyan has access to Bushido Fang and Bushido Dragon, both of which initially require two skill charges to activate. With LD ability Bushido Tempest, Cyan instead requires his special effect gained via his LD Weapon Passive to have 7 stacks in order to use Bushido Tempest. In Final Fantasy Record Keeper, Cyan's Bushido skills are his unique Soul Breaks, obtained on katanas native to Final Fantasy VI. 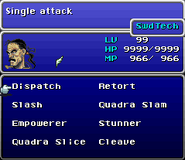 [view · edit · purge]Bushidō, literally "the way of the warrior", is a Japanese word for the way of the samurai life, loosely analogous to the concept of chivalry. It originates from the samurai moral code stressing frugality, loyalty, martial arts mastery, and honor unto death.

In the Japanese version the player can rename Cyan's Bushido techniques, but only in Kanji, not Kana. The Bushido renaming screen was found inside the Bushido menu where a player press the confirm button when selecting an ability. This menu was removed from the US version, and this includes all English versions of Final Fantasy VI.