The Burning Home is a location in Final Fantasy VI. The largest house in Thamasa, the entrance is blocked by a child who lives there. According to the Mayor of Thamasa, the resident who lives there keeps a large number of Flame Rods stored within it.

When Terra, Locke and Shadow are investigating the town and spend the night, Relm is playing with a friend at the house when it catches fire. Strago tries to put the fires out with magic, revealing that the townsfolk are naturally able to use magic. The rescue effort fails though, the Mayor of Thamasa speculating it is due to the residents keeping so many Flame Rods in the house, and Strago, Terra and Locke head inside to find Relm.

After making their way through the house and defeating the source of the blaze, the monster Flame Eater, they find Relm protected by Shadow's dog Interceptor, but the house begins to collapse and they are knocked unconscious. Shadow arrives and saves them by using a smoke bomb to escape, the house collapsing afterwards.

In the ending, the people of Thamasa can be seen rebuilding the home.

The Balloon encounters are scripted when the party interacts with the moving flames. The house has no random encounters otherwise.

The party's encounter with the Flame Eater.

The Burning Home is a very straightforward dungeon, entirely linear save for two side rooms that contain treasures. There are no random encounters, just the scripted encounters with Balloons. Strago joins the party knowing the Aqua Breath Lore, which can easily wipe out the Balloons in every battle.

Flame Eater is a very simple boss. If the player picked up the Ice Rod, an easy way to kill the Flame Eater is to have Terra Trance and use the Ice Rod as an item to cast a defense-ignoring Blizzara - with decent Magic-boosting equipment on Terra, this can easily hit the damage cap and destroy the Flame Eater in one hit. Alternatively, the Flame Eater has only 480 MP and dies when it runs out, so casting Rasp on it a few times will deplete its MP quickly. When Flame Eater is defeated the dungeon is completed after a cutscene. 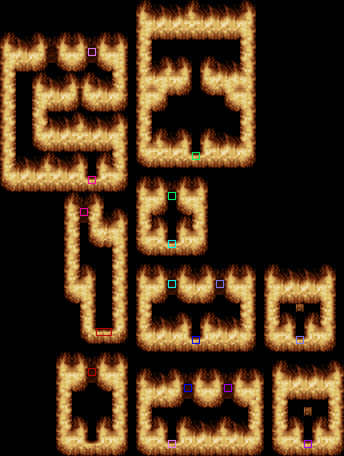 The home before burning down (2014 mobile/Steam).

The villagers attempting to stop the fire (2014 mobile/Steam).