Burning Fists (バーニングナックル, Bāningu Nakkuru?, lit. Burning Knuckle), also known as the Fire Knuckle and Burning Fist, is a recurring weapon in the Final Fantasy series. A type of Knuckle, it is fire-elemental and is usually mid-powered in the Monk's arsenal.

The Burning Fist is usable by Sabin. It can be found in Zozo and bought in Tzen in the World of Ruin. It has 122 battle power and randomly casts Fire in addition to attacking. If bet in the Dragon's Neck Coliseum, it can only be reobtained if the player defeats a Tumbleweed.

Burning Fists is a hand-to-hand weapon that provides +16 damage and +96 Delay. It deals +3.33 damage per second and accumulates +7 TP per hit. It can be equipped by a level 75 Monk. It is used in Mythic Weapons Glanzfaust and "Unlocking a Myth" quests. It is dropped from any NM in Nyzul Isle Investigation and is a 100% drop from HNM on Floor 100 if the Runic Disc holder's job is Monk.

The Burning Knuckle has 53 power and is fire-elemental.

The Burning Fists are a level 60 grappling weapon that grant +45 ATK and +54 BRV, but lower HP by 413. They also boost Chase Bravery damage by 5%. It can be obtained by trading 73,640 gil, the Darksteel Claws, a Chimera Hide, and Brawler's Desire x5.

Those who wear these claws often suffer second-degree burns to their hands.

Burning Fists grants +5 to Attack. It can be equipped by Monk, Tifa, Red XIII, Snow, and Chocobo. 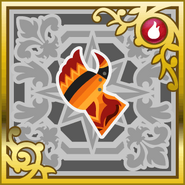 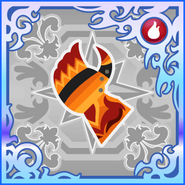 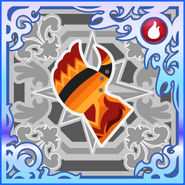 This gallery is incomplete and requires Final Fantasy VI (iOS) added. You can help the Final Fantasy Wiki by uploading images.
Blunt weapons
Community content is available under CC-BY-SA unless otherwise noted.