Covered by a hard shell. Slow-moving, but has high physical and magic defense. Vulnerable to ice and water. Falls easily to piercing weapons.

The Bunyip is an enemy on the Djose Highroad in Final Fantasy X. It is best to bring in Auron or Kimahri for the Piercing ability on their weapon. Bunyip's attacks have a small chance of inflicting Slow, unless Provoked. The Bunyip in the Steal tutorial battle has 10 Strength, doesn't inflict Slow, has no elaborate attack pattern, is immune to Scan, Threaten, and Bribe, and has a Doom count of 3.

In the original JP/NA version, Bunyips drop weapons with Strength +3% and Magic +3% instead of Distill Power. 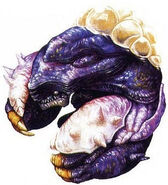 [view · edit · purge]A bunyip is mythical creature from Australian folklore said to live in billabongs, swamps, and other wet areas.