Bugbear (バグベアー, Bagubeā?) is a recurring enemy in the series.

Bugbear is an enemy fought around the world map around Canaan and Vikings' Cove, and are semi-valuable for their rare Phoenix Down drop. 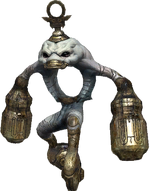 The Borgbear is an enemy often found with other types of Goblins. It appears with the Borgbear Hero in Cie'th Stone Missions 41 and 43.

Borgbear is an enemy fought around Arbor and inside the Ice Caverns, and later only in the Mysterious Lighthouse optional dungeon. It has high Strength and can thus deal heavy damage to the party with its Whirl Bludgeon attack.

Bugbear is an enemy fought at Mt. Lux.

[view · edit · purge]A bugbear is a legendary creature or type of hobgoblin comparable to the bogeyman and other creatures of folklore historically used to frighten disobedient children. The name is derived from a Middle English word bugge (a frightening thing), or perhaps the old Welsh word bwg (evil spirit or goblin), or old Scots bogill (goblin). In medieval England, the bugbear was depicted as a creepy bear that lurked in the woods to scare children. In a modern context, the term serves as a metaphor for something annoying often with a connotation that the loathing it inspires is disproportionate to its importance.