Fire
List of Bugard Enemies
Bugard is a genus of enemies in Final Fantasy XI.

To some residents, the bugard is known as the "walking head and stomach." Its tiny front claws almost appear nonexistent, hidden on the massive head, stubby body, and two powerful legs. The gaping mouth leads to their most distinctive feature: a pair of giant tusks which they use for many different purposes, from combat to defense to burrowing for food, even for courtship. These titanic teeth are essential to the bugards. Despite their hefty size, they prove to be avid runners and can chase down anything that angers them.

Though most commonly found in Lufaise Meadows and Misareaux Coast, the bugards are also found in areas of Aht Urghan. The lizardmen known as the Mamool Ja have learned to domesticate them for combat purposes. Regardless of where the bugards are found, they all share the same dull gray-green scale pattern, though they may vary in size.

To most adventurers, the value of a slain bugard is in its hide and tusks, which are put to use by leathercrafters and boneworkers alike. Unfortunately the flesh is generally not considered edible, so don't expect to find any savory dishes made from bugard meat. 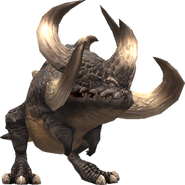