Edit
watch 13:49
World Of Final Fantasy: Kraken And Buer Boss Fight + Shelke Summon
Do you like this video?
Play Sound

Bet you didn't think it was possible to make a floating eyeball even creepier. Well, behold! The buer! Just saying its name is scary: bueeerrrgh! By the by, its eye is actually a keyhole. Find the right key and... nothing will happen.

Buer is a boss in World of Final Fantasy. It serves as one of the four guardians of the keys to the quadrelemence barrier in The Crystal Tower, and is fought alongside Kraken in the tower's Chamber of Fire and Water. It can be fought again at The Coliseum and also appears very rarely as a regular enemy in the post-game dungeons.

Chamber of Fire and Water

Guardians of Fire and Water 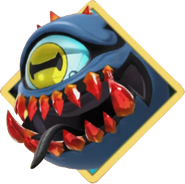 Battle in The Crystal Tower.