Buel is an enemy in Final Fantasy VIII. It is a physically weak flying monster that uses various magic.
See also: Buer

Any magic attacks are almost completely ineffective. However, very weak against physical attacks.

Buels are weak to physical attacks, and magic attacks do little damage. They rely on magic themselves and are good for farming Thunder magic early in the game. At higher levels Buels gain access to Reflect and Death, and might cast the later as a dying attack. They can be inflicted with Silence or Berserk to prevent their use of magic.

Buels from the Fire Cavern can be a good source of AP early on for a low level game due to the low amount of EXP they give.

Buel is a Level 2 Monster Card for Triple Triad used for playing the minigame and for turning into Magic Stone. It is not a notable card for farming purposes. 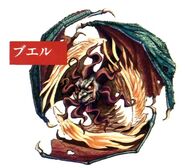 Incidentally, all enemies in the Final Fantasy series named after Buer in future titles do not resemble this depiction in the slightest; this monster, with its beast-like head surrounded by rotating limbs, is the only one that comes close.