Brynhildr is Sazh Katzroy's Eidolon in Final Fantasy XIII. She is a Fire-elemental knight who wields a large bludgeon that also shoots projectiles. She can transform into a race car for Sazh to drive. 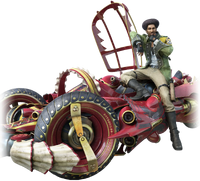 Brynhildr is a red and gold mechanical warrior whose feet have built-in stiletto heel. She has a detail down her chest that looks like lacing of a corset and a frame down her back that resembles a cape. She has horns and wields an elaborate axe with intricate details. As a car, she folds to implement her weapon to the design to become the front bumper, the "shoulder pauldrons" of her "cape" become the front wheels as the frame folds over the car to form a cockpit for the driver.

The text on on the symbol that appears in the ball of fire when Brynhildr is summoned reads (in Latin written in Etro script):

By the grace of Etro, warrior maiden be drawn by the fires of battle. Come forth, wreathed in blazing glory.
A name in blood, a pact of flame. Brynhildr shall rise, her bond eternal and unyielding.
Rousing Inferno.
Ethereal Blaze.

Eidolons resides in Valhalla, the middle realm between the mortal realm and the unseen realm of the dead. They answer to Goddess Etro who sends them to l'Cie who falter on their Focus.

After having learned of Vanille's involvement in the branding of his son, a recently-branded Pulse l'Cie Sazh corners her in the Fiendlord's Keep of Nautilus. Sazh's turmoil summons Brynhildr, and together with Vanille they defeat the Eidolon. Sazh's eidolith manifests in the shape of a chocobo feather, and from this point on he can call upon Brynhildr to aid him in battle by taking the eidolith from his brand and crushing it.

Later, when the party returns to Cocoon from their expedition of Gran Pulse, they crash a grand prix and ride through the racetrack with their Eidolons in Gestalt Mode. Sazh steers Brynhildr in her race car form, his chocobo chick sitting on the steering wheel.

Brynhildr, alongside the other Eidolons, answers Lightning's call for help in the final battle against the god Bhunivelze. Following Nova Chrysalia's destruction, the Eidolons bid farewell to their old comrades before fading away.

Sazh and Vanille face Brynhildr as a boss in Nautilus Park, as a test to prove Sazh's strength to her. After passing the test, Brynhildr joins as Sazh's summon.

Brynhildr yields to those who amass chain bonuses and strengthen their allies. As a result, the Synergist role is crucial. As chain bonuses are difficult to amass in Eidolon battles, the best strategy is to use the Tide Turner paradigm to both strengthen Sazh and Vanille while weakening Brynhildr, then shifting to Dualcasting to build chain bonuses. 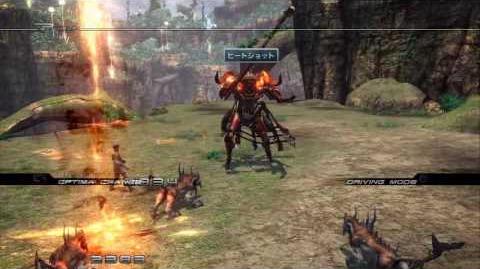 Though Brynhildr is naturally Fire-elemental, Sazh can bestow En-Spells on her to change her elemental characteristics, allowing her to use a wide array of spells based on which enhancements Sazh has cast on her.

Sazh's Gestalt Gauge increases by driving up enemy chain gauges and by augmenting himself and Brynhildr with status enhancements. During her Gestalt Mode, Brynhildr transforms into a sports car. Her concept is Gadget Master.

Brynhildr has 4 ATB slots. The Eidolon's rank is the sum of Sazh's current Crystarium level and the number of roles Sazh has advanced to level 5.

Sazh can cast En-spells on her to modify her moveset. If Sazh's HP is below 70%, she casts Curaga. If either his HP or the Eidolon's SP reaches 0, she will cast Arise before being dismissed.

Brynhildr's abilities summon small jets that shoot bullets from afar to increase a target's chain bonus and chain duration, before dive-bombing into them to deal damage. Chopper Spin and Caltrop Bomb summon one, Centrifugal Sweep summons one per use, and Spark Shower summons three.

Múspell Flame raises the chain gauge by a various amount based on level prior to dealing damage:[1]

"Test of the L'Cie" (ルシの試練, Rushi no Shiren?) plays during Sazh's battle with Brynhildr in Final Fantasy XIII.

Brynhildr is a summon obtained through the summon drawing shop. An alternate variant, Brynhildr Ω, also appears as a summon.

Brynhildr appears as a high level fire-elemental summon whose special attack is Múspell Flame, which deals fire-elemental damage to all enemies. Summoning Brynhildr costs 3 points from the Consumption Gauge.

Depending on the Brynhildr summon's type and rank, the user is able to learn the following abilities:

As opposed to most games using her recurring Final Fantasy XIII design, this game designs her to resemble that of a Valkyrie. 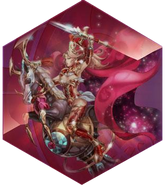 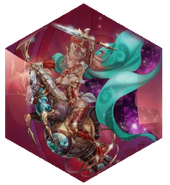 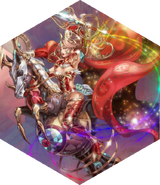 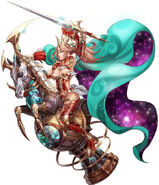 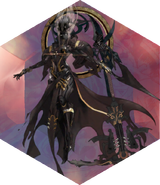 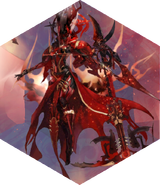 She can be purchased at the Moogle Shop at Crescent Lake in Chapter 1 of Main Scenario 012, and at the Moogle shop near Pravoka in the Confessions of the Creator scenario, for 120 KP.

Brynhildr appears as an obtainable card.

Although Brynhildr herself doesn't appear, her weapon does. Sazh uses the weapon to attack the enemy with Pyroburst. 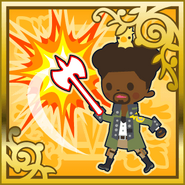 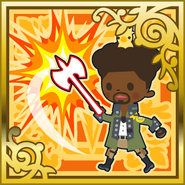 Brynhildr appears as Fire-elemental summon cards. The cards feature its drawn artwork for Final Fantasy XIII and its Gestalt Mode with Sazh.

Brynhildr in her Gestalt form appears on Triple Triad cards in the version available via Final Fantasy Portal App. 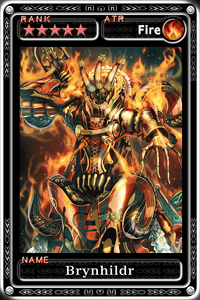 Brynhildr transforms into a race car. Design-wise, the transformation aspect was the key, and once the designers knew she was going to become a car, that detail affected the design of her humanoid form as well. Brynhildr was inspired by a goddess from Viking mythology.[2]

Some promotional screenshots show Sazh and Brynhildr fighting together in Nautilus. This is impossible however, since Brynhildr is the last encounter in the chapter.

Brynhildr participates in the final battle against Bhunivelze in Lightning Returns: Final Fantasy XIII, fighting alongside Noel Kreiss rather than Sazh. The reason for the two being paired was most likely due to Sazh being elsewhere at the time.

Though Brynhildr doesn't appear in Final Fantasy XIII-2, a concept art for it has been shown.

Brynhildr, along with the other Eidolons has been made into action figures in the Final Fantasy Creatures Kai Vol. 3 series. These figures cost ¥6,240 a piece. 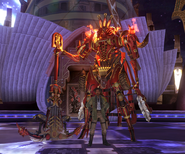 Brynhildr is summoned from a ball of fire.

Brynhildr appears for the first time.

Brynhildr as a boss. 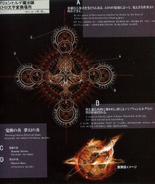 [view · edit · purge]Brynhildr is a Shieldmaiden and a Valkyrie in Norse mythology. In the Völsunga saga, she was sent by Odin to decide a fight between two kings, but was punished by the god after helping his least-favored one then banished her to the top of mount Hindarfjall in the Alps. She must sleep within a ring of fire until any man rescues and marries her. Sigurd entered the castle and awoke Brynhildr by removing her helmet and cutting off her chainmail armor.

The two fell in love and Sigurd proposed to her with the magic ring Andvaranaut. She appears as a main character in the Völsunga saga and some Eddic poems treating the same events. Under the name Brünnhilde, she appears in the Nibelungenlied and therefore also in Richard Wagner's opera cycle Der Ring des Nibelungen.