The Brothers are a pair of minotaurs from Final Fantasy VIII, named Minotaur and Sacred, whom the player can obtain as a Guardian Force. They reside in the Tomb of the Unknown King and must be defeated to join the party. After their defeat, the player receives their cards for Triple Triad.

Brothers is an optional Earth-elemental Guardian Force whose ability pool focuses on defense. They learn HP-J, Spr-J, Str-J and basic elemental attack and defense junctions, as well as HP-boosting support abilities. They are the only Guardian Force to learn Cover that lets a party member take hits in place of their adjacent comrade(s). They also learn Defend, which nullifies physical damage until the user chooses another command. Their unique ability is HP Bonus that permanently boosts HP upon level up. Unlike most Guardian Forces, Brothers learn no refine abilities.

The Brothers allude to Sekhmet and Minotaur from Final Fantasy V. They are two purple minotaurs, bipedal bovines that have human hands. The kanji on their shields means "older brother" (兄, ani?) for Minotaur and "younger brother" (弟, otōto?) for Sacred. Combining both kanji spells the Japanese word for "brother" (兄弟, kyōdai?). During dialogue sequences, Sacred speaks in capitals, while Minotaur speaks in lower-case letters. While Sacred is the younger brother and Minotaur is the older brother, Sacred is bigger than Minotaur. Sacred has red horns whereas Minotaur's are yellow. The tip of Sacred's tail is yellow, whereas Minotaur's is red.

The Brothers reside in the Tomb of the Unknown King. The party must visit the tomb to be allowed entry to General Caraway's mansion in Deling City, but they don't need to venture further than the first indoor area where they recover the student ID they need. Going in deeper and fighting Sacred and Minotaur is optional.

Most of the areas are tunnels, making the tomb appear straight-forward, but if the player backtracks, the viewpoint will change, potentially confusing the player. The player will drop a SeeD rank if they press the

to automatically leave the tomb.

The easiest way to complete the tomb is to always turn right from every screen where it is possible, thus going round in a counter-clockwise manner, visiting all the areas in the correct order. It is useful to equip Siren's Move-Find to find all the hidden draw and save points; the Float spell found in the Watergate room is especially useful.

The party will at first face Sacred alone. After defeating him, and proceeding to the center of the tomb, the party will fight both Sacred and Minotaur in a boss battle. Defeating the duo earns the Brothers Guardian Force. Obtaining Brothers in the Steam/Remastered version earns the player the achievement Brothers.

The Brothers use an Earth-elemental attack against all opponents called Brotherly Love when summoned. Brothers' summon time is 19.3s, which, according to the Final Fantasy VIII Ultimania, allows the player to boost the damage to around 220% of normal damage using a regular PlayStation controller.

The below values are the base compatibility values with all playable characters at the start of the game. Seifer cannot junction Brothers in a normal playthrough, but a default value for his compatibility still exists.

The following table represents the base stats.

Abilities learned naturally by Brothers are listed below:

The duo is fought in the center of the Tomb of the Unknown King. The pair is constantly healed by Earth Regeneration as long as their feet are touching the ground. The player can cast the Float spell on them to prevent their healing. The duo's special hit, Mad Cow Special, is an Earth-elemental attack against all party members used when both are alive.

Sacred and Minotaur are earth-elemental Level 8 GF Cards in Triple Triad card used for playing the minigame and for turning into items with Quezacotl's Card Mod. Sacred's card becomes 100 Dino Bones and Minotaur's card becomes 10 Adamantines. The cards are obtained by defeating the bovine brothers at the Tomb of the Unknown King. Sacred's card is also used for the Queen of Cards sidequest; after the queen requests and gains the Sacred card the player can win Irvine from Flo in Fishermans Horizon. After the Irvine card has been made the player can win back the Sacred card from the boy in the artist's house in Dollet.

The Brothers appear as both an obtainable summon and bosses.

As a summon, they become available after clearing Chapter 8 of Season 1. As the Earth-elemental summon, their effect causes Melee BRV damage and grants or boosts all Earth attacks for its duration. Their passive grants a boost to MAX BRV while party HP is above 80%.

The Brothers appear as bosses in the Record of the Tomb of the Unknown King, although Sacred is known as Sekhret.

The player can prepare by attaching Wind and Poison-based abilities, as the Brothers are vulnerable to both elements. The strategy is nearly identical to the source game: the player should focus on one of them while buffing the party with Protect and Shell to curb damage and halt their hit-all Mad Cow Special. To earn the Target Scores, the player should direct the Wind attacks at Minotaur and the Poison attacks at Sekhret.

The Brothers is one of Rinoa's Soul Breaks, learned from the Party Dress relic. The attack name "Brotherly Love" is announced, instead of the Soul Break's name. The animation is adapted from the animation used in Final Fantasy VIII for the attack. The Soul Break deals 3 Earth-elemental Summon Magic attacks to all targets, and infuses the user with the power of Earth.

The Brothers is also a 6-star Summon Magic ability unlocked for creation from the Royal Crucible. Its attack is "Brotherly Love", and its animation is a quicker version of the concept used for Rinoa's Soul Break. It deals 4 Earth-elemental Summon Magic attacks to all targets. It starts with 2 uses at rank 1, and has 6 uses at rank 6. Honing the ability requires Summoning Crystals, Fire Crystals, and Earth Crystals. 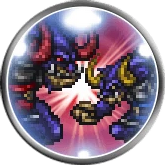 The Brothers appear as an ability card.

The Brothers are alluded to in Final Fantasy XI, in an Empty Battlefield titled "Brothers". The battle is against a pair of Tauri, Eldertaur and Mindertaur, and true to their origins, Eldertaur is the smaller of the two. The Brothers are also paid homage to in Final Fantasy XIV in the new Eureka instance, Pagos, where a special FATE, called "Brothers", can be spawned by killing many minotaur in the area.

The Brothers learn an HP Bonus that yields +30 HP permanent boost upon level up. This is often not considered worthwhile, as HP is easily boosted with junctions and +30 per level up is not a great bonus.

The playable characters (except Squall) comment on Minotaur's size:

Comparison between original models and Remastered.

[view · edit · purge]In Egyptian mythology, Sekhmet was a blood-thirsty goddess with the head of a lion and the body of a woman in Upper Egypt.

They are called Taurus in the French version. [view · edit · purge]Taurus is one of the constellations of the zodiac, and its also a zodiac sign used in astrology.