Final Fantasy Wiki
Register
Don't have an account?
Sign In
Advertisement
in: Anime in the Final Fantasy XV Universe
English

Episode 1: Before the Storm[]

Together with his friends Ignis, Gladiolus, and Prompto, Prince Noctis travels to Caem to rendezvous with Lunafreya Nox Fleuret. In the Regalia, the group's car, the prince dreams of his past, in which he was gravely injured by a Marilith and rescued by his father, Regis Lucis Caelum. A woman who was minding him had perished in the attack.

Noctis and his friends stop at a diner where they learn the Kingdom of Lucis has fallen under Niflheim's control. Outside, an Imperial airship drops off magitek troops to scout the surroundings. This prompts Noctis and company to continue traveling.

The next day, Noctis and his friends find their path blocked by Imperial troops. The four ambush the robotic soldiers, but when victory seems within their grasp, reinforcements arrive. Among their number is the Marilith that almost killed Noctis in his youth. Realizing that the Marilith in his youth had been set upon them by the Empire on purpose, an enraged Noctis charges forward and attacks.

Noctis and his friends resume their journey to Caem. Prompto drives, but makes a pit stop when he comes across an injured puppy. Tending to the puppy's wound reminds Prompto of how he and Noctis first became friends.

As a child, Prompto kept to himself, enjoyed taking pictures of animals, and struggled with his weight. One day, he came across a wounded puppy after school and decided to take care of her until her owner could be found. Prompto nicknamed the puppy "Tiny" and became attached to her. One day he woke up to find the puppy missing, much to Prompto's dismay.

The puppy Prompto found belongs to Lunafreya Nox Fleuret and is called "Pryna." Pryna had returned home to Luna and had been reunited with another puppy in the princess's care, Umbra. When Luna saw a bandage on Pryna's leg with Prompto's name on it, she wrote a letter to him to thank him for taking care of her puppy.

Through Luna's letter, Prompto learned about Pryna and how the puppy had been sent to see Noctis, the prince who attended his school. Prompto decided to do as Luna's letter requested and befriend Noctis, but the prince commented on his weight, inadvertently embarrassing him. Prompto decided he could not face Noctis again until he slimmed down, and started running daily and eating healthier. Finally, as a teenager, a physically fit Prompto reached out to Noctis and became the prince's friend.

Back in the present, Prompto finishes tending to the wounds of the puppy he found and watches as the puppy returns to its mother. Prompto returns to the Regalia as Noctis awakens from a nap. After updating Noctis on what has happened, Prompto and his friends resume their journey. Noctis agrees that Prompto can meet Luna when they reach Altissia.

Noctis, Ignis, Gladiolus, and Prompto are out hunting and kill a large horned beast, a Garula. Prompto is happy that meat is on the menu when two Garulas approach them. They prepare for the battle when an Imperial airship arrives from the other direction. The group stays to fight, but the monsters charge the Empire's line. After dodging the second monster the group engages the imperial soldiers. During the battle Gladiolus recalls how he used to train Noctis in their youth.

A young Noctis practiced swordplay with Gladiolus using wooden swords, but was easily frustrated and prone to give up. Gladiolus viewed Noctis as "stuck up" and in private doubted he would ever be king. Gladiolus's young sister Iris came to the palace to see Noctis of whom she had heard Gladiolus talk about often. While she waited to see him, Iris was distracted by a cat in the palace garden and inadvertently caught Noctis's attention as she pursued it. She eventually wandered outside the palace grounds.

Back in the palace, Gladiolus was shocked to discover that Noctis and Iris were gone. Iris was lost in the woods outside, but Noctis caught up with her and asked her name. He knew the way back because he sometimes played there, and they agreed to keep the escapade a secret. She revealed that Gladiolus is her brother.

Gladiolus was angry at Iris's disappearance, but Noctis took the blame, claiming that he went to play outside and asked her to come along. He was chastised for leaving the palace and was grounded. Gladiolus received an apology, but took the blame himself, saying it was his fault for letting her out of his sight. Later, Iris admitted to him the truth.

The next day, Gladiolus found Noctis working on a project he was made to do because he was grounded. Gladiolus noted he could still train, and the two sparred with wooden swords again. Noctis was again clumsy, but this time Gladiolus told him he had guts, revealing that Iris had told him the truth. From that day on Noctis became more receptive to Gladiolus's teaching and the two became friends.

In the present, the two defeat the Empire's soldiers and the remaining Garula retreats. Prompto asks if they can eat, but Ignis says they must first replenish their supply of spices. Noctis and Gladiolus find they defeated an equal number of soldiers. Gladiolus says that he won't make it easy on them and they fist bump, ready to enjoy some steak.

The group stays at a hotel in Lestallum. As Noctis and Prompto head out, Ignis visits the market to buy spices and bananas before returning to the hotel to bake. When Gladiolus asks why Ignis bakes so much, he recalls how he used to use the palace kitchen trying to recreate a treat young Noctis had once had in Tenebrae.

With the pastries Ignis had driven to the apartment a teenaged Noctis was staying in to get used to living independently, finding the place in a mess. When Noctis came home his apartment was spotless with Ignis busy cooking. After dinner Ignis presented his baked goods but Noctis said it wasn't the same as the treat he'd once had. When taking his leave Ignis tried to instill good habits to the apathetic Noctis, giving him a political report to read.

The next day Ignis attended a political meeting to take notes for the prince. Afterward he met the king and regretted he hadn't been able to effect any change and make the prince take more responsibility. The king said he would leave Noctis in Ignis's care, alluding to his ailing health.

The next day Ignis was disappointed Noctis hadn't read the report and was unwilling to discuss the day's meeting. After the next day's exams Noctis went to Gladiolus's house for sword practice, but was unable to concentrate, and revealed knowing he wasn't ready to succeed the throne but did not want to think about his father dying. Later, Gladiolus met Ignis and they briefly talked about Noctis, Gladiolus implying Ignis should strive to understand the prince more. At Noctis's apartment Ignis found the remains of a failed cooking attempt and Noctis's revision notes. The two had pot noodles and Noctis said Ignis had almost succeeded in the baking last time.

Noctis and Prompto return to the hotel where they taste Ignis's pastries, but Noctis only comments "not quite."

Episode 5: The Warmth of Light[]

The party faces against the Marilith, Gladiolus and Ignis being surprised the Empire is using daemons. Noctis recalls having spent the day out when he was young and the car ahead of them had suddenly caught on fire. They had spotted the Marilith and the woman minding him had tried to take him to safety but was killed. King Regis had arrived and attacked the Marilith that fell off a cliff. Noctis had fallen into a coma.

Noctis, Ignis, Gladiolus and Prompto fight the Marilith but Noctis is thrown off the cliff to the water below. Recalling his father calling out to him as he was falling comatose as a child, Noctis summons his crystal weapons in Armiger, leaps out of the water and defeats the Marilith with his friends' help. After the battle a sad Noctis recalls his father seeing him at a lavish room where he had been recuperating.

The team continues toward Caem, wondering how the four of them could possibly crush the Empire but are still ready to attempt it to reclaim all the things they have lost. When Prompto is excited about the prospect of meeting Luna, Noctis jokes that she might only want to see him. As Prompto gets agitated at Noctis "breaking his promise," Noctis smiles and says he will take a nap.

Within Square Enix, there was initially resistance to the idea of an anime due to the production costs and it being released for free. It was decided that half of the anime's budget would be allocated from that assigned to Final Fantasy XV, and the other half would be covered by sales of physical discs. Ofuji conceived the overall scenario, then handed off the writing duties to writers.[1]

Ignis is the focus of Brotherhood: Final Fantasy XV Episode 4. The episode originally had a different story where Ignis would have discovered Noctis and Prompto hanging out downtown during exam season and reprimanded them before being confronted by delinquents. He would have beaten down the thugs shocking the others.[2]

The reception of Brotherhood Final Fantasy XV was more positive than Square Enix expected. Developers promised to keep feedback the series received in mind while working on it.[3]

The party at a diner.

Prompto and a puppy. 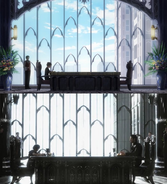 Comparison between the E3 2013 trailer and Brotherhood.

Noctis wields his weapons in Armiger.

[view · edit · purge]Fraternity refers to "a group of people sharing a common profession or interests." It also describes "the state or feeling of friendship and mutual support within a group."