To bestow this blade to another is to anoint them your best friend forever.

The Brotherhood (フラタニティ, Furataniti?, lit. Fraternity) is Tidus's signature sword in Final Fantasy X. It appears in several other games as well. His other signature weapon is his ultimate weapon, the Caladbolg.

The Brotherhood is famous for not only being Tidus's weapon, but for its unique appearance, seemingly made of water. It is one of the most recognizable swords in the Final Fantasy series.

The Brotherhood is a longsword terminating in a long hook with a shimmering blue, water-like blade. In Final Fantasy X, bubbles exude from the blade itself to show its Waterstrike ability after it is customized onto it in Guadosalam. The grip is wrapped in a brown material, and a red ribbon hangs from the pommel area. The guard is black and extends only over the back of the blade.

Gilgamesh's fake Brotherhood in Final Fantasy XII retains the blade's color, but the sword terminates in two hooks rather than one, the grip is black instead of brown, and the guard is a different shape, more closely resembling a wave.

In the Dissidia Final Fantasy series the hook at the end of the blade is slightly shorter, and the guard is a little smaller than its Final Fantasy X counterpart.

Brotherhood used to belong to Chappu, Wakka's brother. Wakka gifted it to him a year before Yuna's pilgrimage when Chappu fought as part of the Crusaders against Sin. On the day Chappu died, he did not take his sword, but chose to fight with an Al Bhed machina weapon instead. This made Wakka despise machina, and he developed a grudge against the Al Bhed. Wakka gives the sword to Tidus because he reminds Wakka of Chappu. It also symbolizes the brother-like bond the two develop.

Brotherhood initially features Strength +5%. When the party visits the Farplane and Tidus listens to Wakka speaking with the image of Chappu, the sword receives Strength +10%, Waterstrike and Sensor. Even though the player receives the sword fairly early, Brotherhood is arguably Tidus's strongest non-upgradable weapon, second only to his Celestial Weapon, Caladbolg.

The Brotherhood has a disadvantage against certain fiends if they resist, negate, or absorb the Water element. However, it is very useful in the Thunder Plains, visited soon after the Farplane, as it is crawling with Lightning-elemental fiends weak against water.

Brotherhood cannot be sold or discarded.

Yuna wields Brotherhood with the Warrior dressphere, but it has no water elemental property. In the International and HD Remaster versions, if the player encounters or recruits Tidus, he will fight with Brotherhood.

Gilgamesh wields a fake version of the Brotherhood among his arsenal of counterfeit versions of other famous weapons. His Brotherhood is a paler shade of blue, has a series of spikes instead of a crest of bubbles at the bottom of the blade, and has two hooks on either side instead of just one. This weapon can be unlocked and used by the player characters via hacking.

A weapon that was held by a dream: a dream that had been made real and then lost again to pay for Spira's past.

The Brotherhood is a sword-type weapon available to Lightning through the sphere hunter downloadable content, and comes with Yuna's Gunner garment and Guardian's Protector, a shield that takes the appearance of Tidus's default shield. It raises Strength by 330 points and Magic by 100 points.

The Brotherhood can be obtained in the update that took place in November 2016. It provides 210 Attack and 180 Magic to the wielder.

Tidus wields the Brotherhood with similar water effects on the sword like in Final Fantasy X. However, the "bubbles" near the hilt take on a more formidable appearance, resembling a second hook at the base of the edged side of the sword.

The Brotherhood is Tidus's signature weapon, which he keeps for every of his character costumes.

The Brotherhood is Tidus's default weapon. Like all other characters' weapons, having it equipped carries no advantages or disadvantages.

Tidus wields the Brotherhood in his character model.

Tidus appears as a Legend wielding his signature weapon, the Brotherhood.

To bestow this blade to another is to anoint them your best friend forever.

The azure sword of a champion from another world. Its watery power grants untold strength.

Tidus appears with his trademark Brotherhood weapon. Due to the game's cartoon-like nature, the sword is larger compared to his body than in Final Fantasy X.

A sword from the distant world of Spira. Its blade is reminiscent of the crystalline waters of the sea. A young man who landed in Spira after an encounter with the mysterious beast known as Sin is said to have received this weapon as a gift from a friend. Afterwards, he would set off on a pilgrimage with a young summoner as one of her guardians in order to rid the world of Sin's calamities by defeating it once and for all.

Brotherhood is a Sword that is obtained as Tidus's Trust Master. It provides 135 ATK and is Water-elemental.

A blade born from where the sun meets the sea.

The Brotherhood was a gift for Japanese players who registered their accounts early. It is a powerful sword equipped by Warrior-type job classes. In the western version, from launch until August 31, 2016, Square Enix awarded players with special items, including Brotherhood.

The sword could also be obtained by drawing the Ace Striker Legend Job card, which is based on Tidus's appearance in Final Fantasy X. Should the player already have possessed the sword, the Ace Striker job could level it up to its +, Bis, and X grades.

Tidus himself was also a playable character; but as a Ranger-type hero, he relied on shortswords in place of longswords. To this end, he received a weapon that mimics the Brotherhood in appearance only.

This section in Kingdom Hearts is empty or needs to be expanded. You can help the Final Fantasy Wiki by expanding it.

Since the Brotherhood is Tidus's trademark weapon, the non-specific appearance of this blade is directly related with the appearance of Tidus in other games.

The Brotherhood as part of the Final Fantasy collaboration. 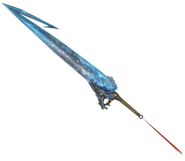 Wakka gives the Brotherhood to Tidus in Final Fantasy X. 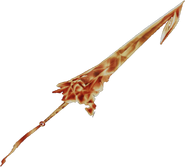 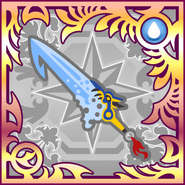 The weapon is called "Fraternity" in the Japanese version. [view · edit · purge]Fraternity refers to "a group of people sharing a common profession or interests." It also describes "the state or feeling of friendship and mutual support within a group."