Who is the leader? I am! I give the orders around here!!

His name is actually Brother, as stated in blitzball matches he participates, and in Al Bhed Home - Living quarters, there's a treasure chest that can be opened if the player answers questions in Al Bhed language: the last question asks what Cid's son name is, and the correct answer is "Brother".

Brother has green eyes with the trademark spiral pupil of the Al Bhed, blond mohawk, and ears adorned with multiple earrings. He wears long, gray pants held by blue-and-red suspenders, and black gloves with iron buttons and red-and-black cuffs. His chest and arms are heavily tattooed.

Brother is lively and wild with a taste for action. He loves Yuna, being somewhat obsessive about her as whenever he hears any trouble around her, he is ready to protect her. He may have developed his over-protectiveness for Yuna after his father, Cid. Brother often acts without thinking and is ready for anything, even going so far as to jump off ship when he thinks Yuna is in danger. In keeping with the traditional Japanese perception of cousins, Brother's crush on Yuna is not halted by his blood relation to her.

He cares for his younger sister Rikku and tells Tidus to take care of her before they fight Sin, although in Final Fantasy X-2, his attention is mostly focused on Yuna. He tells Rikku to use proper grammar, but fails to mention that to Yuna when she picks up Rikku's lexicon. Having only recently perfected speaking another language, Brother slips back into Al Bhed when emotion overcomes him.

Though the leader, having perfected his bilingual skills to better communicate with Yuna, Brother acts more like the group's comic relief. He stays aboard the Celsius while the field team of Rikku, Yuna, and Paine (YRP for short) handle all the actual sphere-hunting, and when they come to possess the Awesome Sphere that all Spiran factions desire, he relegates the decision on what to do with it to Yuna.

Brother to Tidus, speaking English for the first time

When Brother was a child, he attempted to chase off a fiend that attacked a young Rikku at the beach with a Thunder spell, but missed and hit Rikku instead. This traumatized Rikku and left her with astraphobia.

Brother is in charge of an Al Bhed Salvage Ship tasked to recover a sunken airship, and attempts to tell the captive Tidus through gestures that he would be working for them. Even after Tidus helps Rikku in the salvage operation on what would later produce the Fahrenheit, Brother remains cold to the captive.

Brother later leads an attack on Yuna's group when her pilgrimage reaches Lake Macalania, employing an anti-magic machina. After the weapon is destroyed, Brother threatens to tell on Rikku to their father and washes his hands of the situation when she explains she will protect Yuna as her guardian.

When the Al Bhed Home is being invaded by the Guado, Brother pilots the now-operational airship to safety. He opposes Cid's plan to destroy Home but is forced to comply, and leads the surviving Al Bhed in a prayer for their former sanctuary and sobs once the deed is done. Brother remains the Fahrenheit's pilot and, prior to the final battle with Sin, musters to speak the main Spiran language to ask Tidus to keep Rikku safe.

'Disasteriffic' is not a word! Say 'disastrous' like the rest of Spira!

Sometime after the start of the Eternal Calm, having had a falling out with Cid, Brother and his friend Buddy traveled to Spira's north where they discovered the Celsius after being led to it by a gull. Freezing and without food, Buddy and Brother ate the gull to survive, and named their sphere hunter group "the Gullwings" in its honor.

Brother is the airship's pilot. He remains in the airship whenever Yuna, Rikku, and Paine do sphere hunting. When the Gullwings deliver the Awesome Sphere to either the Youth League or New Yevon, Brother comes along. Afterward, Buddy receives a distress signal from the Celsius and it is revealed that the Leblanc Syndicate broke into their airship and stole the other half of the sphere they had obtained in Zanarkand. The Gullwings decide to procure three syndicate uniforms to sneak to Chateau Leblanc and get back the stolen sphere.

After the Gullwings and the Leblanc Syndicate mend their differences when learning of the location of a powerful machina weapon, called Vegnagun, they discover that Vegnagun has disappeared. Brother contacts Yuna, telling her that they should return to Celsius immediately, explaining that fiends are pouring out from the former temples of Yevon. They decide to take up the moniker of "Your Friendly Neighborhood Gullwings" and take out fiends while charging for it.

After Yuna resurfaces after going missing, she returns to the Celsius where Buddy tells her that Brother kept blubbering that he can't go on living if anything happens to her. The Gullwings plan to hold a concert to diminish the conflict between the bickering Youth League and New Yevon and when YRP enlists Tobli for help, Brother orders them to bring all of Tobli's Hypello assistants to the airship to help promote the event.

Eventually, Brother reveals the depth of his affection to Barkeep: having watched Yuna grow as a person during the time they'd shared, he has come to love Yuna with her back to him, "looking ahead into the distance". When Cid comes aboard the Celsius and attempts to make peace with his "wayward" children it escalates into an argument, after which Cid, Brother and Rikku contemplate their futures.

After they destroy Vegnagun and save Spira, the Gullwings decide not to attend the event in Luca held by the leaders of Spira's factions, and go home to Besaid. While on the way Yuna tells Brother to fly higher and faster.

After landing in Besaid for Tidus and Yuna's reunion, the Celsius malfunctions and is unable to fly and even Shinra is stumped on how to repair it. Thus the Gullwings stay in the village. When Buddy, Brother and Shinra are talking among themselves in Al Bhed, a man named Briar points Shinra out as a "Bedore" and tries to attack him. Paine and the other Gullwings subdue him and tie him up at the Besaid Temple.

Brother is the best "free-agent" blitzball player available to hire at lower levels. He boasts good starting PA, SH, and BL stats, and is one of the fastest swimmers in Spira. His stats allow him to dominate the sphere pool until the later stages; as such, he is a handy addition to the Besaid Aurochs. Brother's best position is MF, as it allows him to take advantage of all of his stats. However he can also excel as a forward once he is levelled enough. These advantages are somewhat offset by his late recruitment window (either before going to Bevelle on the airship, or after battling the boss of Zanarkand Dome), meaning he will likely be underleveled if players have been actively playing blitzball.

At level 99, Brother is tied with Nedus for the best SP stat.

Brother can be recruited as a party member through the Creature Creator system. He is obtained automatically whenever the player has no creatures in their roster and is available upon starting the game. Brother attacks with his hips and has access to three abilities: Stormin', Partyin', and Machismo. He can use any of the common dresspheres. Like all monster allies, Brother is controlled by the game's AI.

Brother can be fought in the Youth League Tournament in the Fiend Arena as a boss. During the battle he is paired up with Buddy. 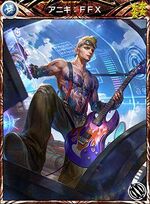 One of the character development system proposals for Final Fantasy X was a "tattoo system" where characters would have a 100x100 grid, and upon level up could place "tattoos" down to boost stats and learn abilities. Seymour Guado's,[1] Jecht's and Brother's tattoos (which they still have in the final game) are a remnant of the this system where different tattoos would confer what abilities the bearer could use.[2] 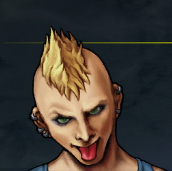 Brother getting kicked by Rikku in Final Fantasy X-2.

Brother reveals his feeling about Yuna.

Brother's name in the Japanese version is Aniki (アニキ?). In Japanese language, Aniki (兄貴?) is a honorable term for an older brother or a superior.