Bronze Spear (ブロンズスピア, Buronzu Supia?) is a recurring weapon in the series. It is part of the bronze equipment set.

While not appearing physically or having any statistics inside the data, there is a text string of Bronze Spear suggesting that at one point during development this weapon was planned to appear in the 3D remake as a spear.

Bronze Spear is a polearm that provides 16 damage and 396 delay. It deals 2.42 damage per second and accumulates 102 TP per hit. It can be equipped by level 7 Warrior, Paladin, Samurai, Dragoon.

The Bronze Spear is a low-level

Lancer. It can be crafted by

Carpenters, obtained as a reward from the quest

A spear made of bronze.

The Bronze Spear is a 2-handed spear within the Forsaken Dungeon. It provides 12 Weapon Atk, 10 Durability, -1 Speed, and -1 Consumption Rate. 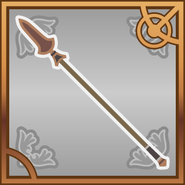 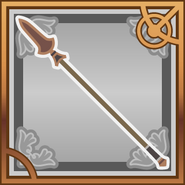