Brionac is a boss in Final Fantasy Type-0. It is a magitek armor weapon used by the Militesi Empire fought in the mission Operation MA Demolition at the end of Chapter 3.

Developed as part of the empire's Ultima Bomb Project, the magitek armor code-named "277" was the result of countless hours of research and testing. Once Cid Aulstyne ordered the construction of a new magitek armor that could transport and deploy Ultima Bombs, engineers from all over the country flocked to the Steelworks in hopes of lending their talents to this national cause.

The Brionac was capable of loading a total of eight Ultima Bombs at one time and firing these charges halfway across Orience. Its range did not extend far enough to strike the dominion and kingdom capitals without crossing their borders, however, so scientists went want to brainstorming. Ultimately, they decided to outfit the mech with heavy plated armor and magic barriers to ease the difficulty of invasion. Many researchers had high hopes for this seemingly unstoppable magitek armor.

Unfortunately their hopes were rended asunder when a dominion task force infiltrated the arms production facility outside of Ingram and demolished the prototype in its unfinished state. Down but not defeated, scientists quickly resumed work on a second prototype, but production immediately halted with the announcement of an Orience-wide armistice. Thus, the curtain closed on the tragic tale of Brionac, never to see the light of day.

Brionac is fought in a room with an entryway and a platform. Its attack will kill the player, but can be avoided by hiding in the entryway. If Brionac swings its arm downward, the following attack will sweep across in front of it. When the arm is pulled back, the cadet can move into the entryway to avoid it. If Brionac lifts its left arm, it uses an arm slam attack. When its arms electrify it sends out a fleet of Strikers.

There are Breaksight chances immediately after its attacks.

The important part is knowing where Brionac going to attack to avoid these areas. It may be wise to battle alone because the AI-controlled cadets will likely die. Most of the time Brionac's attacks are avoided by moving to the entryway. After each attack return to the room to avoid an attack on the entryway. It's good to pay attention to Moglin, when told to hide the player should head for the entryway.

When the Brionac's arms electrify the cadet should head back to the entryway and shoot down the Strikers flying out by locking on to them as they approach. They can be killed with Killsight. If Brionac lifts its left arm, get into the entryway to avoid the arm slam. There is a Breaksight chance immediately after. 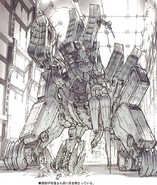 [view · edit · purge]Brionac, the spear of Lugh, is a weapon from Celtic mythology.