Brina is a light-elemental eidolon that appears in Final Fantasy Dimensions II. The signet can be obtained for Aemo as a first-time completion reward for defeating the Calco and Brina Flans on the fifth floor of Babil Tower for the first time.

If obtained at the start of Chapter 2-1, it will provide Aemo with a small boost in HP, MP, and magic, but provides lower attack and speed stats. Brina's signet's Mystery Waltz abilities are one of the first MP recovery abilities, making it valuable when tackling battlefields with more than five rounds of combat. Lastly, her signet's Dancing Girl summon attack is excellent when taking on all of Chapter 2, which heals and buffs the party, making it an adequate signet for Mootie to equip. Due to the summon lacking a passive, Brina's worth decreases when progressing through the "Crystal of Time" arc.

Brina is based on the Calca and Brina dolls that first appeared as bosses in Final Fantasy IV. Brina's signet artwork depicts her as a small child, taking influence from her appearance in Final Fantasy IV: The After Years. Her second artwork takes the most influence from her After Years appearance, with Brina donning a red dress and having curly blonde hair. Her final artwork takes a drastic turn in her appearance, having her dress become a multi-layered ball gown, and her hair changing to a dark blue hue and shaped to resemble butterfly wings.

Brina's summon attack is Dancing Girl, which restores HP for all allies, along with softening damage and increasing their speed for 2 turns. Summon Brina costs 2 bars from the Summon Gauge.

The following are the abilities Aemo can learn from Brina: 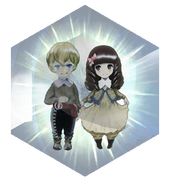 In the original Japanese free-to-play versions, both the Brina and Calca signets were released during the game's time as Final Fantasy Legends: Toki no Suishō. Brina's signet could only be obtained through the game's summon draw shop and could be equipped by all party members. Her signet taught the same abilities as in the premium release of the game.

There was also an extra Calca and Brina signet that could be obtained through the draw shop in the original free-to-play versions. This signet allowed the wielders to use the Gaze I-III abilities. It also had the Last Dance summon attack, which allowed the user to sacrifice half of their max HP to inflict double of the amount as damage to all enemies. The Calca and Brina signet was removed in the premium version of the game.