Briana White was born and raised in Orange County, California, United States. She developed a love of the performing arts at seven years old, and had an acting background rooted in community theater in her hometown of Orange County, California, performing and working backstage in annual shows, and directing multiple one-act plays in high school. She later graduated New York University with a Bachelor of Fine Arts degree in Theater in May 2013.[2]

Briana grew up playing mostly Nintendo games, due to her mother also being a Nintendo fan.[3] The hours she had spent playing videogames prepared her when recording Aerith, as she was able to perform the battle grunts immediately, knowing exactly how they would sound.[4] Her first Final Fantasy was Final Fantasy XIV, a game she greatly enjoyed and spent many hours playing. She had also played and enjoyed Final Fantasy XV prior to being cast, and streamed it on her channel. Though Briana had not played Final Fantasy VII prior to being cast, she had familiarity with the characters.[3]

Aerith has a pretty big moment in gaming history. It's iconic enough that everyone knows exactly what they were doing. Everyone remembers, 'it made me cry' or 'I was sitting next to my cousin' or 'I had the guide open, thinking this can't be right.' They know exactly where they were when that moment happened. And so from the very get-go, beginning my research for this project, that's the first thing I saw. Knowing that she has that place in people's hearts was a lot of pressure from the very beginning. To actually take on that challenge of giving this character life, it's been one of the most challenging and rewarding experiences of my entire life.

Aerith was Briana White's first real voice acting role. Because of her relative inexperience, she did not expect to be cast when auditioning, instead aiming to have fun with an audition that she expected would not come to anything.[6][7] Nonetheless, she had still prepared in the event she booked the role, and stopped drinking alcohol so as to protect her throat.[4] Upon learning from an email that had booked the role, Briana felt a sense of shock and awe,[7] later comparing the feeling to when she had been accepted into NYU.[6]

Once cast, Briana White prepared by examining Aerith across multiple game series, reading articles, watching compilation videos, and fan breakdowns, in order to pay homage.[4] She disagreed with the advice she had received from other voice actors to not listen to Aerith's other voice actresses for reference, wishing to honor those voices while creating a voice that was unique to her. She described her performance as a formulation that "does honor the original, but is still very much its own version of Aerith's character".[3] Though she did listen to Aerith's voice, Briana continued to avoid playing Final Fantasy VII while recording voice lines for Aerith to keep her portrayal separate enough from the original game.[5]

Briana's biggest challenge when recording was overcoming her self-doubts, fearing that any anxiety she felt would come out in the recording. She received advice and encouragement from John Eric Bentley, the voice of Barret Wallace, after meeting him at the Kupocon fan event in Vancouver in 2019. Bentley told Briana to trust that there was a reason she had been cast over the "hundred million people that could've been in that booth", something she took to heart given his voice acting experience. Briana was also encouraged by the positive fan response in contrast to the online toxicity she had expected.[8]

A few months following the reveal of Aerith in Final Fantasy VII Remake in 2019, Briana published a video on her YouTube channel, publicly addressing her audience and saying she is extremely excited for the game.[6] After recording the lines, she played the game and uploaded gameplay of her playthrough on YouTube in a series featuring other voice actors, beginning with John Eric Bentley.[9] 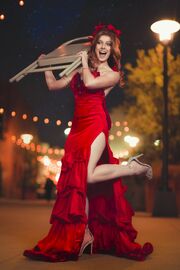 I think that one of Aerith’s core characteristics is that she has hope and has hope in her fellow people that she shares the earth with. She has a trust that everything’s going to be okay if you just keep going. And I really share that personality trait…That’s one way that, despite recording for this project being so challenging, Aerith inspired me.

Briana approached Aerith with the goal of preserving her identity as a "sweet flower girl", as she is in some iterations, but portraying her as also someone who is "sassy, can spit fire, and doesn't need to be protected". Briana portrayed Aerith as merely playing with the idea of being a damsel, toying with Cloud Strife in asking for a bodyguard, but not actually needing his protection. She described this element has being a modern take, and came to cherish Aerith as a well-rounded character, resonating with her positivity.[3]

In spite of not playing Final Fantasy VII prior to recording Aerith's voice lines, she found many fans would still remark that her portrayal was exactly how they had imagined Aerith would sound. When she later played the game, she also noted many similarities in Aerith's personality in the original game compared with the voice lines she had recorded.[5]