Various, depending on era

Various, depending on era

Long ago, Lake Bresha and the surrounding land were crystallized. After the fall of Cocoon, the entire area was destroyed. Now, these ruins are a restricted area, filled with remnants of life from a previous life. Today, excited researchers and cautious guards swarm the site in hopes of new discoveries.

Bresha Ruins is a location in Cocoon in Final Fantasy XIII-2, and a returning location from Final Fantasy XIII, although the landscape is different: the area is not crystallized, the lake is no longer there, and so the ruins are just chunks of buildings from the Hanging Edge.

During the catastrophe that befell Cocoon, the Bresha Ruins were the site of terrible casualties. The reason for this can be found in the Purge.

The Purge was the name given to the mass deportation of Bodhum's residents. The fal'Cie manipulated the actions of the Sanctum and the elite army known as PSICOM, sowing chaos and inciting conflict among Cocoon's populace.

Many civilians fled to Lake Bresha and its ruins to escape the Purge, but a great majority were crushed by ancient structures that collapsed when Cocoon's momentum was suddenly halted.

The Bresha Ruins are the remains of an ancient city that once stood on the shores of Lake Bresha, one of the eeriest sights on Cocoon. During the events of the Purge that immediately preceded the fall of Cocoon, a Pulse fal'Cie turned the waters of the lake into crystal.

Even burning flames became crystallized, creating spectacularly evocative and unusual landscapes. However, because the waters of the lake are now frozen solid, the famous fish restaurants that once dotted the shore are sadly no more.

Serah Farron, Mog, and Noel Kreiss arrive in the Bresha Ruins at 5 AF through a Time Gate after departing from New Bodhum at 3 AF. Serah introduces Noel to Cocoon before a giant arm emerges from a nearby rift and attacks. Noel protects Serah from the towering opponent, and they take it on together until military airships arrive and destroy the beast for good.

The travelers are taken into custody because they are civilians in an off-limits area. A few moments later, a woman called Alyssa Zaidelle, an Academy trainee, tells the soldier who guards the prisoners that they are special guests of the Academy, acting as observers. Alyssa tasks Serah, Mog, and Noel with defeating Atlas, who appears in the ruins because of a time paradox. They defeat a Cait Sith and Zwerg Scandroid, and recruit them into their party via the Paradigm Pack system, and Mog speaks for the first time, explaining Serah's ability to tame monsters.

Alyssa informs the party that a device which appeared alongside Atlas has been detected. Near the device, Atlas takes them into a Temporal Rift, within which they resolve an anomaly to escape. The party uses the mysterious device to weaken Atlas and slay it by destroying the crystal atop its head returning the Bresha Ruins to their former glory.

Noel approaches a gravestone and reads the epitaph dedicated to those 'cast out', which Serah explains must be a gravestone dedicated to the Purge victims. When Alyssa arrives at the Lamentable Rest, she searches the gravestone for her name and is relieved to not find it. She reveals a friend of hers died in the Purge while she survived, and that ever since she's dreamt of dying, her soul raising from her dead body, and seeing the aforementioned gravestone with her name on it. Noel says she seems real enough to him. Serah is wracked with guilt, believing the Purge was her fault for being made a l'Cie five years ago.

Fifteen years later at 20 AF, someone from an unknown anti-Academy terrorist organization tampers with the device responsible for controlling Atlas and summons horde of monsters in the ruins. The Academy abandons the site and offers money for dealing with the monster-infestation and mercenaries occupy the area. The gil offer drives Mog who says he has lots of space in his pockets, but when questioned what he would use the money for, he claims to need money to decide.

By traveling across the timeline Serah, Mog, and Noel find two passwords for the device. In year 100 AF they release Kalavinka that crossed through time, which they slay and free the Bresha Ruins from the monster-influx. By resolving the paradox, the party is given a toilet paper coupon, much to Mog's disdain.

There are numerous changes to the original areas in the five years prior to the visit of Serah, Mog, and Noel, just as there are changes in the hundreds of years after. The Excavation Site is the same as the Forgotten Commons from Final Fantasy XIII, but in Final Fantasy XIII-2 the south-eastern way has been "locked" by a wall, Atlas's hand protrudes from a deep gorge where the ruins of a fountain once lay, and there is a new tunnel in the north-eastern corner of the Excavation Site.

Echoes of the Past is an area previously known as A City No Longer with several entrances to the tunnels; in Final Fantasy XIII, A City No Longer had no indications of side entrances or tunnels, although it is possible the Academy made them to study the ruins' depths. The Lamentable Rest area is the smallest area covered in tombstones and houses a memorial dedicated to Purge victims; it resembles a part of the southern area of Echoes of the Past in the first game. There is no way to the northern parts of the old Echoes of the Past, as massive ruins block the passage.

In Final Fantasy XIII, the Pulse Vestige housing the fal'Cie Anima crashed into Lake Bresha's waters, and the resulting waves and spray crystallized as they formed. The lake cannot be visited Final Fantasy XIII-2, leaving no evidence of its current state.

Echoes of the Past

At 5 AF and 100 AF, the Bresha Ruins has two main themes: "Unseen Intruder" and its remix, "Unseen Intruder -Aggressive Mix-", the latter of which plays when monsters appear on the field. They are composed by Naoshi Mizuta, and in the Japanese version, the themes are accompanied with vocals from singer Aimee Blackschleger. "Unseen Intruder" was the first song Mizuta wrote for Final Fantasy XIII-2, and that it is a vocal song with rap makes it a piece that reflects director Motomu Toriyama's desire to have a sound that's unlike the typical Final Fantasy title.[1]

The North American and European versions removed the vocal work, making it a purely instrumental track, and added some extra instruments during the main choruses of the original song. In the localized version of the theme's Aggressive Mix, one lyric is included: "Time traveler".

The battle music for Paradox Alpha is "Worlds Collide". After Atlas is defeated, "Missing Link" becomes the new background theme. At 300 AF, the Bresha Ruins' theme is "Full Speed Ahead", a rearranged version of "Noel's Theme".

In an early demo, the "New Bodhum" theme plays in the Bresha Ruins. 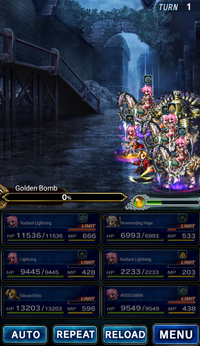 There were several different concepts of how the Bresha Ruins would appear in the game. In one of the concept artworks, Eden, the floating capital city of Cocoon, has collapsed into Lake Bresha that lies at the bottom of the crystallized Cocoon. The ruins of Bresha from 500 and 900 AF are also included within the artworks of Final Fantasy XIII-2 Ultimania Omega. By the time's passing, the area wouldn't change that much, but in 900 AF, the ruins would have been completely submerged by the lake.[2]

In early materials, a Flandragora and Myrmidon are depicted as be enemies appearing in the ruins. However, Myrmidon was scrapped, while Flandragora were renamed Flanbanero and moved to the Sunleth Waterscape.

Lake Bresha is the only area where insignificant people communicate with the player directly in non-event cutscenes. In this case, it is when the talkative guard runs up to the player and Serah responds to his question.

Using a cheat engine to fly up high, it becomes apparent the background for Bresha Ruins is/features the crystallized lake from Final Fantasy XIII.