Breakga (ブレクガ, Burekuga?), or Brak2, is an upgraded version of Break, which attempts to inflict Petrify on all enemies.

Breakga (also called Brak2) is a Level 7 Black Magic spell. Breakga causes the Petrify status to a target with a 40% accuracy. It can be used by the Black Mage, Magus, Sage, and Onion Knight, and by the enemies Rock Gargoyle, Fachan, Thanatos, Doga, Echinda, Kum Kum, and Platinal. It is Earth-elemental, and cannot be reflected. It can be bought for 20,000 gil on the Invincible and in Doga's Village.

Breakga is available only to enemy creatures and has an impressively large area of effect. Breakga can be used by the notorious monster Alabastor Antlion; Ouryu, a powerful Dragon from the Chains of Promathia story; the Jailor of Faith; Waraxe Beak, a Cockatrice notorious monster; Sobbing Eyes, Ahriman-type notorious monsters; Poroggo; and Vanguard's Scorpions, the pets of Quadav Beastmasters in Dynamis.

Breakga is an ability that can be chosen in the Onion Knight's Sage EX Burst, although it does nothing when selected. 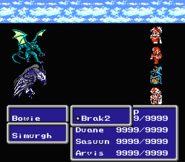