Break HP Limit (HP限界突破, HP genkai toppa?) is a support ability that allows characters' HP to exceed the normal limit, usually increasing it from 9,999 to 99,999.

Zack breaks the HP limit when equipped with the Genji Armor or Adaman Bangle.

He can also break the HP limit in a different way—actually exceeding his max HP, with help of the DMW.

Break HP Limit can be customized onto armor by using 30 of the rare Wings to Discovery items. It raises the HP cap from 9,999 to 99,999 on the player with the respective armor equipped.

Break HP Limit is the second-most dominant ability for an armor, behind Ribbon. The armor with Break HP Limit becomes the Genji Shield for Tidus, Genji Bracer for Auron, Arcane Ring for Yuna, Super Goalie for Wakka, Genji Armlet for Kimahri, Minerva Bangle for Lulu, and Atlas for Rikku.

When paired with Break MP Limit, it becomes the most dominant auto-ability combination for an armor. With this combination, Tidus has the Endless Road, Yuna has the Solomon Ring, Auron has the Overlord, Wakka has the Indomitable, Kimahri has the Pride of the Ronso, Lulu has the Samantha Soul, and Rikku has the Dreadnought.

Omega Weapon, Nemesis, and the Dark Aeons in the PAL, International, and HD Remaster versions can drop armor with the Break HP Limit ability.

Characters can break the HP limit via the Enterprise accessory and through passive abilities available on the Higher Power and The End Garment Grids. Only the special dresspheres have Break HP Limit as a job ability, after the acquisition of certain key items.

The only way to get HP high enough to go over the limit is by using Bubble. Although the display doesn't go beyond 9,999 HP, the effect still occurs and can even allow Balance to break the damage limit. Libra can display up to 99,999 HP.

In the Zodiac versions, it is possible to reach 9,999 HP (and thus 19,998 HP with Bubble), but a hard cap is set. In The Zodiac Age, Esper HP values are increased significantly, and all of them can naturally break the HP limit.

During the battle against Leviathan and Ardyn, when Noctis unleashes his Armiger, he passively breaks the HP limit, on top of gaining a boost to his stats. 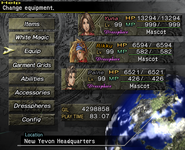