A glitch that results in more damage than the highest intended limit is called an overflow glitch. This is especially notorious for Final Fantasy VII.

Enemies in the remakes gained a boost in their HP and new enemies with higher HP were added. The attacks in the Dawn of Souls, 20th Anniversary and mobile editions can exceed 9,999 damage, and it will show the amount on screen. This is only possible by augmenting attacks with status-increasing items or magic.

In the original version, only the final boss, Emperor, has more than 9,999 HP. Nevertheless, players can exceed the damage limit if they boost their damage with the help of Haste and Berserk and are equipped with the Blood Sword(s). Instead of displaying the true damage value, the game will only display the last four digits in the damage window, e.g. if one were to deal 12345 damage, the damage window will state 2345.

In later remakes, attacks in the Dawn of Souls, 20th Anniversary and mobile editions can inflict more than 9,999 damage, but will only show the maximum of 9,999 damage even if more is inflicted. This amount of damage is only possible by augmenting attacks with status-increasing items or magic.

The original NES version allows players to break the damage limit of 9,999. This is most commonly done with the fully equipped Onion Knight strategy, as that is the strongest setup. Even if the player were to exceed 9,999 damage, the game will still display 9,999 damage. However, the exact amount of damage will be dealt to the target nonetheless.

All attacks in the 3D remakes allow more than 9,999 damage, but it will display 9,999 damage even if more damage is done. To check the real amount of damage players can visit the old man who lives in the town of Gysahl who records various information from the game, including the maximum amount of damage dealt.

The Limit Ring is an armor piece that allows a character to break the damage limit, provided their Attack power and Strength are high enough. There are also several Band abilities that can exceed 9,999 damage: Makeshift Cannon, Petal Whirlwind, Infinity, Sky Grinder, Ultima Spark, King's Quad, Final Fantasy, and Double Jump. All other Bands can break the damage limit if at least one of the characters involved has the Limit Ring equipped.

The Tokita Sword is one of three super items that were likely used for testing purposes that still reside in the game's coding. The debug sword allows the equipped character to break the damage limit.

The GF Eden and Quistis's ultimate Blue Magic, Shockwave Pulsar, can exceed 9,999 damage. The GF Cactuar can deal 10,000 damage at level 100. The damage limit can also be broken using the Kamikaze ability. ChocoBocle is another attack capable of breaking the damage limit, but it can only obtained by playing Chocobo World in the original version. In the Remastered version, where Chocobo World compatibility is removed, it can instead be obtained raising Squall's level to 75.

The normal damage cap is 9999, but with Break Damage Limit it rises to 99999. Break Damage Limit can be customized into weapons with 60 Dark Matters. Fully powered-up Celestial Weapons also have the ability. Aeons' attacks and Overdrives also have this capacity, although Valefor, Ifrit, Ixion, Shiva, and Yojimbo only gain this ability after Yuna, Wakka, Kimahri, Lulu, and Auron's Celestial Weapons, respectively, have been upgraded with their Crest.

The aeon Anima can seemingly break the 99999 damage limit in International/PAL/HD versions when using her Overdrive. Anima's overdrive, Oblivion, lands 16 hits on each enemy. When animations are set to short, these hits are combined into a single damage value. This may create the appearance that Anima can exceed even the 99999 damage limit; however, it is simply displaying the total damage of 16 hits, in which each individual hit is still limited to 99999; thus the total damage to each enemy cannot exceed 1,599,984.

Yuna, Paine, and Rikku can break the damage limit via the Invincible accessory and through special abilities on the Higher Power and The End Garment Grids. Only the special dresspheres have Break Damage Limit as a job ability, after the acquisition of certain key items.

Invincible is acquired by asking the cameraman in Kilika Port in Chapters 1, 3 and 5 about the Youth League base. After speaking with him in Chapter 5, he will take the party to the new Youth League base where the accessory Invincible can be found. The Higher Power Garment Grid is acquired in Chapter 5 found inside the Chocobo Ranch. The End Garment Grid is obtained from Shinra after completing Shinra's Bestiary.

In the International and HD Remaster versions, the Garment Grids Peerless and Last Resort have these abilities as well, by passing through yellow and blue gate, respectively.

Dealing 99999 damage in battle in the HD Remaster version earns the trophy/achievment Overkill.

In the original PlayStation 2 version, Quickenings, Numerology, and Dark Matter can break the damage limit, and the Arise spell can heal over 9,999 HP. Because the game has an invisible Break HP Limit (players' max HP can exceed 9,999 by utilizing the Bubble buff, although that is the highest value displayed on screen), Balance can also deal more than 9,999 damage if used by a low-health character whose maximum HP exceeds 9,999.

In the Zodiac versions, all damage can exceed 9,999.

The Daze status allows an attack to deal up to 199,998 damage without requiring a Genji Glove equipped. In the original Japanese PlayStation 3 release, the damage from Daze was calculated after the damage cap applied, allowing attacks to deal up to 1,999,998 damage, with the "1" not being displayed.

Uncapped Damage is a passive ability that raises the 99,999 damage cap to 999,999 damage. Only Lightning's Commando form learns this ability through her Crystarium. It cannot be infused into other Paradigm Pack allies. Lightning also breaks the damage limit by default in the "Lightning's Story: Requiem of the Goddess" downloadable content scenario.

Limit Break is an elemancy effect that lets spells break the damage limit.

In "Final Fantasy XV: Episode Ignis", Ignis naturally breaks damage limit in battles where he uses the Ring of the Lucii.

Due to an overflow glitch, if Benjamin casts Cure on the Dark King, he will deal damage well over the intended limit.

The player is able to break the damage limit by default and all attacks that exceed 9,999 HP will be shown.

Wall Rushes can do more than 9,999 damage, but the extra damage is not shown.[1]

Overstrike Soul Breaks, introduced with the Challenge Event Glimmer of Hope, can break the 9,999 damage cap and extend it to 99,999 damage.

In addition, Cloud's Ultra Soul Break, Ultra Cross Slash, grants him (or the evoker, in case of Roaming Warriors) the status SOLDIER EX Mode. In addition to increasing the user's Attack and granting guaranteed critical hits for the duration, all physical attacks by the user will break the damage cap.

In the early versions the damage cap was set at roughly 2,14 billion per turn. Updates changed the damage cap mechanics drastically to 99,999,999,999 points, with an additional damage cap per hit of 9,999,999,999. It is possible to break the damage cap through use of multi-hit attacks, along with chaining to boost damage. Both caps are the highest in the series.

The normal damage cap is 9,999 per hit but there are several ways to break the cap. Certain Vision Cards grant the ability to increase the damage cap limit by a certain amount when equipped. Units that can unlock their EX Job will have a Damage Limit increase ability in their ability board, which must be unlocked through leveling the main Job Lvl to at least 19. The skill must then be leveled up to extend the limit by up to 2,000 damage. The introduction of Truststones provides another potential source of damage limit extension if the player crafts one with such an ability. Some content, like Guild Raids, provide a default extension of the Damage Cap limit for easier clears. All sources of damage limit break stack.

As the damage cap is set per hit, it is possible to circumvent the normal damage cap limit through the use of multi-hit abilities, as even if individually they would be less than the damage cap, they can be high in terms of the total sum. The most reliable way to achieve this is through chaining multi-hit attacks of the same attack type and element. Decreasing the enemy's speed while augmenting that of the player's units can greatly delay the opponent's next turn allowing chains to build rapidly before they disappear as soon as the enemy gets a turn. Breaking the damage cap in this fashion is often necessary to efficiently clear events with high HP bosses, such as Raid or Trials of Reckoning. 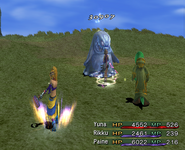 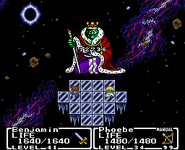