I can't hear the Hymn so well anymore. Pretty soon, I'm gonna be Sin. Completely. I'm glad you're here now. One thing, though... When it starts, I won't be myself anymore. I won't be able to hold myself back. I'm sorry.

Braska's Final Aeon is the last boss of Final Fantasy X the player can lose against under normal conditions. Although another boss is fought afterwards as the final boss, it's impossible to die in that battle short of self-incapacitation, making the battle against Braska's Final Aeon the last challenge in the storyline, and is often considered as the "true" final boss.

Every time Yu Yevon possesses one of Yuna's aeons in the final battle, they take on the appearance of the Dark Aeons. This could mean that Braska's Final Aeon also looked different before becoming Sin's core.

I promise this will be quick! Hit me with all you got, Dad!

The player starts the battle with Tidus, Yuna, and Auron. Braska's Final Aeon is fought in two stages. He is flanked by two Yu Pagodas that use Power Wave to remove negative statuses and heal him for 1,500 HP. Braska's Final Aeon has an Overdrive gauge that fills by a small amount when targeted or using an attack, and fills by 20% when the Pagodas use Power Wave. Tidus can reset the gauge by talking with a Trigger Command, which will take effect on Braska's Final Aeon's next turn and prevent him from acting, but this can only be done twice. The Talk command will appear a third time, but will prove ineffective.

Jecht Beam can petrify, and his standard attack can shatter a petrified character. Since Jecht Beam also does damage, if it kills a character, they will shatter instantly. Jecht Beam also has a very small chance to inflict a critical hit. The Triumphant Grasp Overdrive will target a non-petrified character and deal heavy damage over two hits, which may inflict the Zombie status and has a small chance to be a critical hit. When faced with an aeon, Braska's Final Aeon will use Jecht Bomber as an alternate Overdrive, which can do up to 4,000 HP damage.

In his second form, Braska's Final Aeon will draw a mighty sword from his chest, and spikes that resemble wings emerge from his back. His physical attack gains a new animation, and he can hit all party members at once with a sword swipe, delaying their turn. Though not named on-screen, his sword swipe is called Blade Blitz in the game's data files. Blade Blitz will always be used first, and has a small chance to be used afterwards. Triumphant Grasp is slightly stronger than in the first form, but no longer inflicts Zombie or criticals. When Braska's Final Aeon's HP falls below half, his Overdrive will change to Ultimate Jecht Shot, which can hit all characters for around 4,000 to 5,000 damage. Against aeons, he continues using Jecht Bomber as an Overdrive, which can now break the damage limit. Blade Blitz will also be used more often, replacing the physical attack entirely.

With Celestial Weapons and the Break Damage Limit ability, the battle will be easy. Thus those who embarked on developing their party to take on the Monster Arena and the Dark Aeons will find the final battle trivial. With maxed stats and use of the Celestial Weapons, the battle can be won in three hits (one-hit kill for the first half and two for the second). The Yu Pagodas can be ignored, as they will never get a turn.

To protect against petrification, the player can equip Stoneproof armor. (Capturing one of each fiend in Djose Highroad for the Monster Arena yields 99 Petrify Grenades that can be used to add Stoneproof to armor.)

It is best to kill the Pagodas off at the same time, as the remaining Pagoda will spam Curse and Osmose. Since the Pagodas initially take their turns right after one another, it may be effective to cast Slow on one of them, separating their turns and minimizing the effectiveness of their Power Wave.

Jecht Bomber can be reduced to a quarter of the normal damage by using the aeons' Shield and further by using Cheer. When Braska's Final Aeon enters the second battle phase and starts charging for Ultimate Jecht Shot, Tidus should use his Talk command.

Keeping the party members' HP up is vital. Buffs such as Protect, Haste and Regen are useful, and if Yuna has learned Auto-Life, it will also help. Using Stamina Tonics to double the party's max HP is good, especially when coupled with Break HP Limit. (Capturing at least one of each fiend in Besaid for the Monster Arena yields 99 Stamina Tonics.)

Doublecasting Flare and Ultima, and using plenty of Overdrives, will prove effective.

Possibly the easiest strategy is as follows: Yuna should have finished her Sphere Grid path and started on a new path by this time. If she is taken down Tidus's or Auron's path, she can quickly develop her strength attribute, which magnifies her aeons' strength. If Yuna has Anima available, she can potentially destroy the Final Aeon's second form in just two hits by inflicting up to 99,999 damage per hit.

Even without Anima, Bahamut's Overdrive, along with a couple of regular attacks, should dispatch of Braska's Final Aeon, provided Yuna's strength attribute is at least 28. Shiva's Overdrive is also potent, with damage figures around 40,000 not being unusual for an average-stat player (providing the player has upgraded Lulu's Onion Knight with the Venus Crest).

Though it may take a few tries, the player can poison the boss, and Auron's "Break" skills can take effect as well. Braska's Final Aeon is not immune to Zombie, so if the player uses Zombie Attack or Zombiestrike, the Yu Pagodas will damage him with the next Power Wave rather than heal him, although it will also remove these status ailments.

For those who wish not to use gamebreaking methods, a common approach is to doublecast Flare or Ultima with a high Magic character who does not have Break Damage Limit to keep the Yu Pagodas dead by consistently hitting them for exactly 9999, while minimizing the hazard presented by Braska's Final Aeon himself through use of Power Break and Protect, and perhaps Cheer.

Braska's Final Aeon can be killed in one hit with Yojimbo's Zanmato. If Zanmato is used on the first form, the second form must still be fought.

Braska's Final Aeon appears as Jecht's EX Mode. He is human in size and shape, though otherwise resembles the Final Aeon. The Final Aeon's attacks Triumphant Grasp and Ultimate Jecht Shot are available to Jecht as HP attacks, and he can learn Jecht Beam in Dissidia 012 Final Fantasy.

As Braska's Final Aeon, this creature is the culmination of his summoning prowess and Jecht's own physical strength, making it a force of destruction that would topple Sin - and bring tragedy to Tidus and Yuna.

Possessed of a wish to save the world, and the will to end the spiral of death.

Braska's Final Aeon is a boss inside the Zanarkand Ruins. Defeating him rewards the player the Caladbolg. 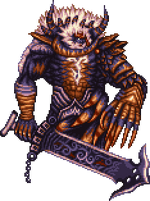 Braska's Final Aeon appears as part of the Final Fantasy Series Boss Battles representing Final Fantasy X. In this game the Boss focuses exclusively on physical attacks and buffing his ATK stat regularly. Some abilities like Jecht Beam or Curse are used but the Yu Pagodas are not present. Most notably neither Triumphant Grasp or Ultimate Jecht Shot are employed and are replaced by other abilities. 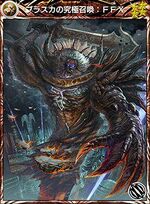 Braska's Final Aeon appeared in Puzzle & Dragons as part of the Final Fantasy collaboration. He was first introduced in the collaboration event that happened in the North American version of the game from May 16, 2016 to May 29, 2016. When fought in the Void Beyond, he uses the skills Arrrgh!, Jecht Beam, Osmose, Power Wave, Triumphant Grasp, Ultimate Jecht Shot and Ughh... After defeating him, he drops Tidus's Brotherhood.

He was obtainable as a 5-star ranked unit named "Braska's Final Aeon", with a physical type and water and dark elements.

As a 5-star ranked unit, Braska's Final Aeon appears in his standard form and is fueled with power by the Yu pagodas next to him. His active skill is Ultimate Jecht Shot and his leader skill is I won't be able to hold myself back.

Braska's Final Aeon pulling a sword out of his chest. 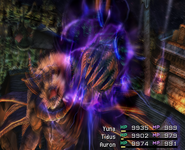 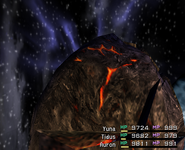