Final Fantasy Wiki
Register
Don't have an account?
Sign In
Advertisement
in: Characters in World of Final Fantasy, Antagonists, Kings

Edit
watch 24:44
World of Final Fantasy: King of Bahamut, Brandelis Boss Fight
Do you like this video?
Play Sound

Tony Amendola
Brandelis is the main antagonist of World of Final Fantasy. Originally a Bahamut, Brandelis achieved status as an Exnine Knight, an organization of beings and non-beings who seek to annihilate all existence.

Due to his permanently armored form, Brandelis's physical appearance is unknown—it's possible that he may even be the armor. His jet-black armor is layered and ornate with a bronze trim. His shoulder armor, along with his helmet, are adorned horn-like protrusions that curve upward and behind him. His faceplate has rib-like decorations that converge towards the mouth like fangs, concealing Brandelis's face, leaving only his deep green eyes visible. He typically folds his six wings around his body, though they unfurl when he's fighting seriously.

As cruel as he is powerful, Brandelis is an uncaring monster to all but his closest allies, having performed such actions as crystallizing the souls of his followers, killing Lusse, Rorrik and Hauyn in front of Lann and Reynn, and unleashing the Cogna to destroy all of Grymoire and soon all other Realms of Fantasy, all without the slightest twinge of remorse or hesitation.

Brandelis is also an incredibly intelligent being, flawlessly manipulating Lann and Reynn for the vast majority of their quest in order to open the Ultima Gate with a plan formed a century in advance, the two only vaguely catching on to the fact that something was wrong, but never realizing until the plan was complete.

Soul Beneath the Armor:
Bahamut Brandelis

King of Bahamut
The "king of Bahamut" is not Brandelis’s own styling, nor does he consider himself the ruler of any "federation." These names were adopted by Segwarides to lend an imposing air to their growing army.

Sphere of Influence
Because Brandelis is actually present in Grymoire, he is able to create a threshold of his own, within which he can apply the rules of his own worlds. These rules allow him, for example, to possess human vessels with his allies, and he was able to transform Lann's Ultima Gate so it unleashed hordes of Cogna upon Grimoire.

Furthermore, his threshold has the power to override the most fundamental rules of Grymoire or any other A-World (as he calls worlds created by the god Alexander), rendering him virtually immortal.

A Past Century, A Century's Passing
Perhaps one of our story's greatest mysteries is this: what exactly was Brandelis doing in Grymoire during the hundred years of Reynn and Lann's slumber? The answer, as it turns out, is "nothing." Brandelis did not know Segwarides was building the Bahamutian Army, because he was imprisoned. Lusse and Rorrik used the last of their strength to trap him, locking him between the Ultima Gate and the great door of light. The door's four keys were hidden across Grymoire along with four of the Pleiad, the world's mightiest espers.

However, keys that lock can also unlock, and in time their powerful magic would draw Lann and Reynn through the gauntlet of Mirages guarding them. They found the keys, just as Segwarides "prophesied," and finally removed the one barrier holding Brandelis in place.

The Exnine Knights
Sometimes written as "Ex9." An order of knights with godlike power. They despise everything about Alexander, creator of the Realms of Fantasy, and seek to bring about the destruction of all of Alexander's work. Enna Kros is aware of twenty-seven members, but many of their abilities and identities remain shrouded in mystery.

Each member of the Exnine Knights has a numeric designation; Brandelis's, for example, is Ex9-II-5.

According to Tiababylo, Brandelis was formerly a Bahamut like himself; the two of them had been rivals an untold amount of time in the past. At some point, Brandelis merged with a human named Efrawg and a mysterious entity from the Extraverse and was made an Exnine Knight: he was given the rank of Number II-5 and departed from the esper world. During his travels, Brandelis would invade and destroy many worlds in the multiverse.

One hundred years ago, Lann and Reynn opened the Ultima Gate in an attempt to summon a god and alleviate their mother's burden. This, however, allowed Brandelis to set foot in Grymoire, transforming Lusse and Rorrik into vessels for two of his fellow Exnine Knights, Zona Seeker Segwarides and Valigarmanda Pellinore. The twins fled from Grymoire into an alternate Nine Wood Hills, allowing Brandelis and his compatriots to begin their conquest of Grymoire, enslaving all Jiants and turning them into soldiers of their Bahamutian Federation.

A century later, Lann and Reynn would return to their home without their memories, finding Grymoire almost completely subjugated by the Federation. Brandelis is soon informed of their arrival, and speaks with Segwarides and Pellinore to set their century-long plan in motion. Through the false Crimson Prophecy, the twins would gather four special keys and ascend the Crystal Tower in the Nonary Region, with the Ultima Gate at its peak. After a battle with Brandelis, Lann and Reynn use their powers to open the Gate, but it's revealed that the entire quest was merely a ruse created by the Knights as a means of letting the Cogna into Grymoire.

Fighting their way through countless Cogna, Lann and Reynn reached the top of Castle Exnine, the base of Brandelis and his compatriots. The two defeat Segwarides and Pellinore, and learn of their true nature as corrupted forms of their parents, before Brandelis appears, kills them, and initiates one more battle with the newly orphaned heroes. Even with all their newfound power, they are unable to do much more than stalemate Brandelis. Lann, distraught, uses his power to seal both himself and Brandelis within a cage like Hauyn was trapped in, bringing the King of Bahamut to an end, but at a grave cost. However, thanks to Tama's sacrifice, time was reversed, giving Reynn a chance to save Lann. On the other hand, this act freed Brandelis from his prison.

With the help of various summoners, Lann and Reynn storm the Crystal Tower again and free their parents from Segwarides and Pellinore's influences. Despite their efforts, both Lusse and Rorrik pass on due to the injuries they sustained. Lann and Reynn then battle Brandelis shortly afterward, forcing him to transform into his true form: Exnine Bahamut. Ultimately, while they do defeat him, the twins are incapable of killing Brandelis and attempt to send him out of Grymoire along with the Cogna through the Ultima Gate, but are forced to fall in with him.

Brandelis is fought as a boss in Chapter 20, Chapter 21, and the Postscript.

Brandelis is based on Bahamut as he appears in earlier installments of the Final Fantasy series, such as Final Fantasy V.[1] His appearance and his ability to use Impulse, however, are based specifically on his Final Fantasy X incarnation.

It is stated in-game that he and Tiababylo are two of sixteen champions who earned the title of "Bahamut", but it's not specified whether he is supposed to represent some previous incarnation of Bahamut from the games.

Brandelis's Japanese voice actor is Hidekatsu Shibata, while his English one is Tony Amendola.

The Exnine Knights watching the Cogna emerge from the Ultima Gate. 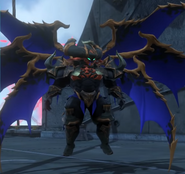 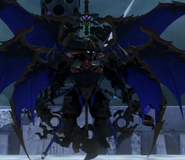