Why are you not happy? You have returned to the place of your birth.

(Bran Bal, ブラン・バル?, lit. BuranBaru) is the village where the Genomes live, on the planet of Terra in Final Fantasy IX. This is Zidane's place of origin, and the source of the blue light from his dreams. It is also the birthplace of other Genomes, such as Mikoto and Kuja.

When you received the gift of life in Bran Bal, Kuja could not bear it. He could not bear to see a Genome with more power than his own; he felt threatened... He dropped you onto Gaia, the world he would destroy.

Immediately before Zidane and company enter Bran Bal, Garnet sees the eye on the underside of the Invincible, recalls the destruction of her hometown, and faints. The remaining party follow Mikoto inside Bran Bal and attempt to search for a curative to revive Garnet.

They are shocked upon discovering the Terran village is comprised entirely of Genomes, Zidane's brethren and vessels for Terran souls. Eiko locates Mikoto, and is told the female Genome will wait for Zidane in an "underground laboratory". The rest of the party comforts Garnet, who has just recovered from her vision. Eiko finds the group and relays the information to Zidane, who runs off to find Mikoto.

In Bran Bal's basements, Zidane is confronted with multiple Genomes held in test tubes and the truth Mikoto reveals to him: Zidane is a special Genome intended to assist his creator, Garland, in absorbing Gaia into Terra. Garland had created Zidane as his Angel of Death. 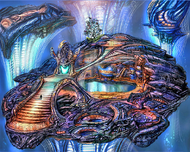 Confused, Zidane wanders into the Pandemonium, where Garland appears to him. Garland builds on the revelation that Mikoto began: Kuja was the original Angel of Death, however, Garland had deemed him a failure because he could not naturally enter Trance, so he had constructed the perfect Genome: Zidane. Kuja had abducted a young Zidane and fled to the planet he intended to destroy. Garland shows Zidane an image of a dying Gaia and its harvested souls, held in stasis by the Iifa Tree. Distraught over his intended fate, Zidane attempts to attack Garland, but is instead captured and jailed in the Pandemonium. His friends immediately strike out to find and rescue him.

After Kuja goes berserk and destroys Terra, Bran Bal is destroyed along with it, but the player party manages to save the Genomes and escape through a portal back to Gaia with all the Genomes on-board.

Stiltzkin will sell the party a Diamond, Ether, and an Elixir for 2,222 gil.

Retrieved from "https://finalfantasy.fandom.com/wiki/Bran_Bal?oldid=1256340"
Community content is available under CC-BY-SA unless otherwise noted.