Cid Pollendina: Oh, shut up and help me remodel the Bran Bal page!
Please expand this article into a full one. The following tasks need to be completed:

Why are you not happy? You have returned to the place of your birth.

Bran Bal is the village where the Genomes live on the planet of Terra in Final Fantasy IX. This is the birthplace of all Genomes and is continually bathed in blue light from Gaia's crystal. Bran Bal is an unrevisitable location.

When you received the gift of life in Bran Bal, Kuja could not bear it. He could not bear to see a Genome with more power than his own; he felt threatened... He dropped you onto Gaia, the world he would destroy.

Before Zidane and company enter Bran Bal, Garnet spots the eye on the underside of the Invincible, recalls the destruction of her hometown, and faints. The remaining party follows Mikoto, a Genome girl who led them to Bran Bal, inside, and searches for a curative to revive Garnet.

They are shocked to discover the Terran village is comprised of Genomes, Zidane's brethren and vessels for Terran souls. Eiko locates Mikoto, and is told she will wait for Zidane in an "underground laboratory". The rest of the party comforts Garnet, who has recovered from her vision. Eiko finds the group and relays the information to Zidane, who runs off to find Mikoto.

In Bran Bal's basements Zidane finds Genomes held in tanks and Mikoto reveals the truth to him: Zidane is a special Genome intended to assist his creator, Garland, the ruler of Terra, in absorbing Gaia into Terra. Garland had created Zidane as his Angel of Death. Confused, Zidane wanders into the Pandemonium where he meets Garland in person.

Kuja, Garland's original "Angel of Death", goes berserk and destroys Terra, and what becomes of Bran Bal is unknown. Zidane's party saves the town's Genomes and escapes through a portal back to Gaia with the Genomes on-board the Invincible.

Moorock is found in the room in the upper right corner of Bran Bal, but he is initially stuck inside a vase. Moorock has never heard of Mognet, but upon learning of it wants to send a letter to Mozme in Pandemonium:

Stiltzkin will sell the party a Diamond, Ether, and an Elixir for 2,222 gil. He is found in the room with Moorock, the save moogle of Bran Bal, during the time Zidane is on his way to talk to Mikoto about his past and then decides to look for Garland. This is Stiltzkin's last stop on his trip before he appears back in Alexandria.

If the player buys all of his item packs in every location where he appears, Stiltzkin will reward the party with a Ribbon in all versions after the original Japanese PS1 release. The player's inventory can't be full on any of the items Stiltzkin has for offer, or he won't sell his item pack until the player uses up an item to make room.

Bran Bal's music is "Bran Bal, the Soulless Village" (魂無き村 ブラン・バル, Tamashīnaki Mura Buran Baru?). It appears on the original soundtrack as the seventh track on disc 4. A piano arrangement of the theme appears on the Piano Collections: Final Fantasy IX album.

The entrance to Bran Bal. 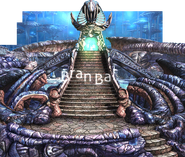 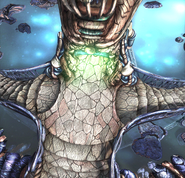 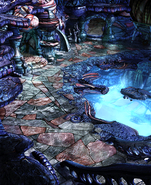 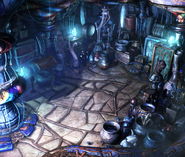 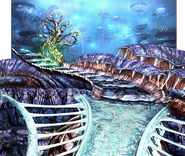 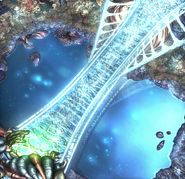