Bwahahaha! Kuja! So you finally decided to show your girly face here! You're all that stands between me and total domination! Gehehe!

Brahne Raza Alexandros XVI is Alexandria's ruler and mother of Princess Garnet in Final Fantasy IX. Though she ends up causing much death and destruction, Garnet testifies she had once been a kind and well-liked monarch and not the power-hungry villain she became after her husband passed away and the mysterious Kuja started to show his face within Alexandria Castle.

Queen Brahne is a large, 39-year-old[1] woman with pale, blue skin, large lips, and a bulbous, purple nose. Kuja calls her "the ugly elephant lady" and Baku, the leader of Tantalus Theater Troupe, refers to her as "fat-ass, butt-ugly Queen Brahne". Brahne wears a fair amount of makeup, including blush and lipstick, and her face is covered in freckles. Her eyes are blacked out under a large domed golden helmet from which two blonde, bristly ponytails protrude from either side. She dresses extravagantly, wearing a long red coat with a feathered trim, a striped blouse, a long skirt with a golden sash, and a lot of jewelry. She often carries a fan.

Although once kind and benevolent, when Brahne's husband died, she became cruel and bitter. A mysterious man named Kuja convinced her to wage war on the other nations of the Mist Continent, leading to her insatiable greed and subsequent indifference over preserving innocent lives. Brahne becomes blinded by her desire to rule and even puts her daughter's safety at risk.

Upon her deathbed Brahne is finally free from her greed and lust for power. She deeply regrets her actions and deems the people will be happier with Garnet as the new queen.

It breaks my heart to see such greed! The war was my fault? No, no! Your mother wanted it! All I did was give her a little push!

Brahne was born in October of 1760.[1] Her father died in a battle between Alexandria and Burmecia when she was ten.[2] She married when she was sixteen and was crowned as the queen of Alexandria. She ruled Alexandria peacefully for many years and when she was 23 her mother passed away.[1] Year later she gave birth to a daughter. In 1789, when she was 29, Brahne made Adelbert Steiner the captain of the Knights of Pluto after he bested Beatrix in a sword fight. A year later, Brahne's daughter passed away.

A small adrift boat was discovered with a 6-year-old girl who had a horn on her forehead. The girl's horn was removed and she was made the "replacement" princess, seeing she resembled the recently-deceased Princess Garnet. The girl was told her name was Garnet and that the royal couple were her parents. Having lost most of her memories, the girl accepted this as truth.

Four years later in 1794[1] Brahne's husband died, and in the years to come Garnet would notice Brahne's behavior change.

A man named Kuja had convinced her to conquer the neighboring countries of Lindblum and Burmecia, using an army of black mages created from the Mist that covers the continent. Kuja told Brahne that Garnet possessed the power to summon eidolons, magical beasts of legend of unimaginable power, fueling her greed. The eidolons could not be harnessed until Garnet was sixteen, Garnet herself remaining oblivious of her heritage as a summoner.

The kingdom's heirloom, a valuable crystal shard, is a piece of a summoning jewel that, according to Kuja, could call forth a formidable eidolon. The jewel had been divided long ago with the shards distributed among the continent's kingdoms, and thus Brahne plots to steal all the shards for herself. Under utmost secrecy a manufacturing plant is set up in Dali to produce living black mage dolls, soulless automatons who can wield powerful black magic, to create a magical army that would blindly follow the queen's command.

On Garnet's 16th birthday on 15th January 1800, Tantalus Theater Troupe arrives in Alexandria to perform Garnet's favorite play, I Want to Be Your Canary. Despite the festivities she appears gloomy, but Brahne fully enjoys the show, at least until it is revealed the actors conspire to kidnap Garnet. The princess is whisked away on the theater ship while wearing the royal pendant holding Alexandria's piece of the valuable summoning jewel. Enraged, Brahne orders the Black Waltzes, powerful black mage variants with a need to complete a given objective no matter the cost, to bring back both Garnet and the pendant. The mages fail at their task and are vanquished by Garnet and her new friends who join in on her quest to find out what is happening with the kingdom.

Alexandria and its army of black mages invade Burmecia, whose king and survivors escape to Cleyra, a colossal tree protected by a sandstorm. Visiting the ruins with Kuja and the Alexandrian general Beatrix, Brahne marvels at the site of destruction, but fails to find the crystal shard they were looking for.

Hearing of the massacre, Garnet returns to the castle to confront her mother, but Brahne has a sleeping spell cast on her and orders her court jesters and mystics, Zorn and Thorn, to extract the eidolons from Garnet for her own use. Brahne decides Garnet is no longer of any use to her and orders her executed. Brahne tests the power of one of the extracted eidolons, Odin, on Cleyra, and the entire tree is obliterated after Beatrix steals the Burmecians' crystal shard. Beatrix begins to doubt the queen's motives, and when she hears Garnet is to be executed she helps her escape Alexandria with her new friends.

Her daughter on the loose again, still in possession of the royal pendant, Brahne hires two bounty hunters, Lani and Amarant, to retrieve the pendant and kill the rogue black mage traveling with Garnet. The Alexandrian army advances on Lindblum, which is greatly damaged by her black mage army and the eidolon Atomos Brahne summons upon the city. Lindblum is occupied by Alexandria and Lindblum's piece of the summoning jewel falls into Brahne's hands.

Now controlling all of Mist Continent, Brahne's lust for power only grows. The black mages defect, and, deeming them as well as Kuja's services useless, Brahne sets out to hunt him down, which turns out to be her undoing. Brahne guides her navy to the coast of the Outer Continent where Kuja is said to be hiding, and summons Bahamut to attack him. He enslaves the eidolon with the Invincible and unleashes Mega Flare to destroy Brahne's fleet. Garnet watches the events unfold from the shore, unable to help.

Brahne's battered escape pod washes ashore on a nearby beach where Garnet finds her mortally wounded. With her dying breath, Brahne asks for forgiveness for the things she did and is relieved to finally be free from her terrible greed. She passes away in her adopted daughter's arms. Despite Brahne's campaign for power, the people still remember her fondly, and a tomb is constructed alongside Alexandria Castle to honor her. Garnet later visits it to reaffirm her conviction to keep fighting Kuja.

Kuja later claims to have used Brahne's soul, trapped in the Invincible filled with greed, to enter Trance.

Queen Brahne appears as an opponent in PlayOnline's Tetra Master.

According to one of the castle cooks (Ovenmeister), Queen Brahne's favorite dish is deep-fried bat.

If the concept art is to be believed, Brahne may have originally had a giant pet cat she would use as a couch. A smaller cat can be seen in the portrait of her in Alexandria Castle.

Brahne snaps her fan in the FMV in which Garnet escapes Alexandria, but when the game returns to normal gameplay, she is fanning herself. It is possible she carries extra fans, a humorous element also used for Rude's sunglasses in Final Fantasy VII: Advent Children.

Brahne's favorite flower is the red rose, hence the name of her airship, the Red Rose. The people of Alexandria give Garnet a wreath of red roses for her mother's grave. A mini-figurine of the queen exists as a collectible key item, and it appears in an Active Time Event with Vivi.

Brahne's appearance in the game.

Queen Brahne in an FMV.

Queen Brahne in an FMV. 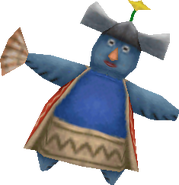 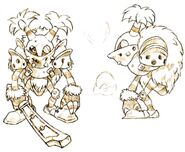