Brachioraidos (ブラキオレイドス, Burakioreidosu?, lit. Brakioreidos), also known as Vlakorados, Th'uban, Brachiosaur, and Brachosaur, is a recurring enemy in the series ever since its first appearance in Final Fantasy VI. It often appears as either a very powerful enemy fought late in the game, a boss, or even as a superboss.

The Brachioraidos had a different name in every one of its first six appearances. The first game it appears in is Final Fantasy VI, where the Advance release names it "Brachiosaur" after the dinosaur from which the enemy's Japanese name derives. This name is used in earlier localizations, but compromised by character limits. The original SNES localization names it "Brachosaur" to fit ten characters, and while the PlayStation keeps this name, it refers to it as "Bracsaur" in the "Colosseum" information from the main menu to fit eight characters.

Its name in Final Fantasy VII, Vlakorados, makes an effort to translate the enemy's Japanese name, though it is not a perfect match, and it misses the "Brachio" reference. Final Fantasy X ignores the original Japanese and goes with its own reference for "Th'uban". The Final Fantasy IV Advance accurately translates the enemy's name to "Brachioraidos".

The Brachioraidos is heavily inspired by Brachiosaurs and Dragons and usually appears identical to one those creatures or as a mix of the two.

Brachioraidos is an optional boss fought on the second to last floor of the Lunar Ruins in the Game Boy Advance and later remakes. It drops the most powerful shield when defeated, the Hero's Shield. It fights using exceptionally powerful abilities, such as Scorch, Object 199, and Maelstrom, as well as mimicking Bahamut by counting down to Megaflare. If attacked while counting down, it will unleash a powerful series of attacks upon the party after casting Protect and Reflect on itself.

Brachiosaur is the game's most powerful enemy fought in the Dinosaur forest in the World of Ruin. It fights using powerful physical attacks in addition to Meteor, Disaster, and Ultima, which can easily destroy a party that's not at a very high level. The Brachiosaur is capable of dropping the very rare Celestriad and has valuable Ribbons that can be stolen.

Vlakorados is an enemy fought on the world map outside of Bone Village and in the grass area near Icicle Inn. It has an astronomically high HP for an enemy at the stage of the game it can be fought at, rivaling that of endgame enemies. While it has high HP it is not an exceptionally powerful enemy, and is vulnerable to various statuses as well as Gravity-elemental attacks such as Demi and Laser. Vlakorados are important enemies as they carry the Carob Nut, an item needed for chocobo breeding. 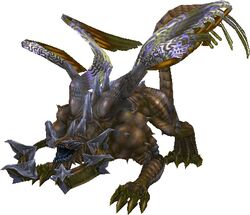 Th'uban is a superboss fought in the Monster Arena as part of the Original Creation set of monsters after breeding six Species Conquest monsters. It is an exceptionally powerful boss, boasting high physical attacks, the Condemn skill which is used as a counter to attacks and can inflict Delay as well as remove buffs, and its powerful Rainbow and Convergence attacks. In addition, it can also cast Regen, Protect, Shell, and Haste on itself.

The Brachiosaur is a powerful notorious monster encountered inside of the Diadem. The enemy has a large amount of HP and is capable of wiping multiple parties easily. The enemy refers to the enemy of the same name from Final Fantasy VI, even having access to powerful abilities such as Meteor and Disaster.

Despite being based off the enemy's appearance from Final Fantasy VI, the overall design of the enemy is based on the actual Brachiosaurus dinosaur. 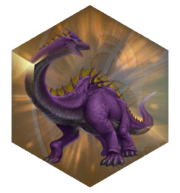 Brachiosaur is a earth-elemental summon.

The summon's special attack is Dragon Breath, which deals earth-elemental damage to all enemies. All versions of the summon are able to go up to rank 7. Summoning Brachiosaur costs 2 point from the Consumption Gauge. 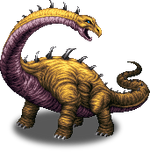