These leather hand guards are designed to protect without interfering with the business of combat.

Bracers (ブレイサー, Bureisā?) is a recurring armor piece in the Final Fantasy series. It is sometimes an accessory as well, and is usually a mid-ranked accessory while being a high-ranked armor piece. It grants bonuses to physical stats.

The Bracers is an arm armor exclusive to Josef in the Advance and 20th Anniversary versions, which provides 30 Defense, -5% Evade, and 34% Magic Evade, as well as +99 Strength and +99 Stamina. It can only be obtained at Arubboth.

The Bracer is the strongest armlet, and can be used by everyone except Steiner and Freya. It provides +35 Evasion, +18 Magic Evasion, +1 Strength as a level up bonus, and increases the power of Wind-elemental attacks. It teaches Add Status and Power Throw, and is synthesized at Black Mage Village (endgame) for 24,000 gil, Battle Boots, and a Venetia Shield.

Bracers are Auron's choice of armor, and the Bracer is the default starting armor, or an armor that can be obtained if it only has one ability slot.

Bracer is an accessory that grants +3 Attack, the highest bonus for Strength available. It costs 50,000 gil to buy. It can be found with the Treasure Hunter ability in Limberry Castle Gate as a rare treasure.

Leather bracers made so as to not hinder the hands.

Bracers is a mid-ranked glove that provides +5 Attack and +12 Defense. It can be bought for 15,000 gil in Sprohm after the fourth shop upgrade, or as a reward for a "Mountain - Mountain - Cave - Cave" Treasure Hunt.

Bracers is a mid-ranked glove that teaches Death Strike to Parivirs and Berserkers and provides +5 Defense and +1 Resistance. It can be bought for 5400 gil in the shop after creating it in the Bazaar after using a Zincatite, Quality Hide, and Dragon Bone.

A bracer that raises its wearer's attack and HP. Its high efficiency despite its rough appearance makes it a popular piece of equipment for mercenaries, who by trade will accept missions on behalf of whoever pays the right amount. This behavior is something that knights who stand for nobility and justice frown upon. However, there are many factors that can influence the outcome of a battle, and one of them is most certainly money.

Bracer is an accessory, obtained as Gaffgarion's Trust Master. It provides 30 ATK and HP +15%. 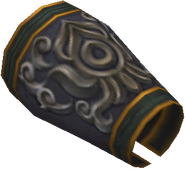