A crossbow that can be fired with one hand. Uses shorter bolts than a traditional crossbow.

Bowgun (ボウガン, Bōgan?) is a recurring weapon in the series. It is generally the weakest crossbow in the games it appears in.

Bowgun is the weakest crossbow, providing 40 Attack, 5 Evade, 28 CT, and 7% Critical Rate. It requires the Crossbows 1 license to equip, and can be bought for 3,800 gil at Rabanastre and Jahara or as a gift from Supinelu in Jahara by giving him the Jaya Stick.

In the Zodiac versions, it now provides 21 Attack, 5 Evade, 24 CT, and 7% Critical Rate and requires the Crossbows 1 license for 25 LP. It can be bought for 880 gil at Rabanastre, Nalbina Fortress, and Barheim Passage, found at Garamsythe Waterway (No. 10 Channel (Flooded)), or stolen from Alraune (3% chance).

Bowgun is the weakest crossbow, providing 3 Attack and 5% Weapon Defense. It can be bought for 400 gil at an Outfitter after meeting with Dycedarg at Eagrose Castle in Chapter 1.

The Bowgun is not an equippable weapon, but shows up as part of Vaan's Crossbow attack. It is swapped out for the Gastrophetes in EX Mode. 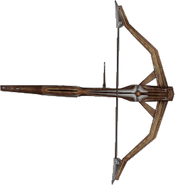 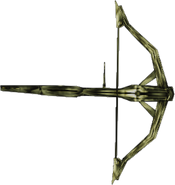 A bowgun is another name for the crossbow.