Disciple of the Land

All Gridanians may rightly claim to share a close relationship with nature, but none is so intimate as that of the botanist. It is our calling to nurture the natural environment to the mutual benefit of man and wood.

The Botanist is a Disciple of the Land in Final Fantasy XIV.

The botanist's profession encompasses the procurement of resources from all forms of plant life. This includes harvesting vegetables and grains, tending fruit-bearing trees, cultivating fibrous plants, logging timber, and more.
Botanists also endeavor to educate others about the need to maintain a symbiotic relationship with Eorzea's plants, rather than carelessly stripping them of their useful parts. Owing to their intimacy with nature, botanists are known to revere Nophica, the goddess of abundance.

Botanists specialize in gathering raw materials used as crafting ingredients for other guilds, notably the Carpenters', Weavers', Alchemists', and Culinarians'. Botanists also attempt to educate others about the importance of achieving a symbiotic relationship with Eorzea's flora, rather than carelessly stripping them of their useful parts. This is perhaps best exemplified by the revolutionary irrigation methods devised by Gridania, which first made low-impact, high-yield crop propagation possible.

At first, the menu contains unknown materials with known drop rates. The materials will only be revealed once it is successfully gathered. At each attempt, the material to be gathered can be changed. The player has a limited amount of attempts to gather as each attempt, successful or not, lowers the node's health bar. Abilities can be used during each attempt.

After a successful gather, experience points towards the Botanist class will be rewarded. It is also possible to get chained experience bonuses when gathering in succession.

Botanists use hatchets as their primary tool and scythes as their secondary. Their armor is primarily made up of "Gathering" gear that they share with other disciples of the land. Gathering gear provides bonuses to the gathering, perception, and GP attributes. The Gathering and perception attributes respectively improve the chance of successfully gathering an item and the chance of receiving a high quality version of said item. GP is the resource they use in place of MP for their abilities. 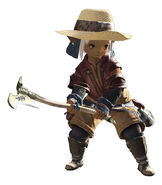 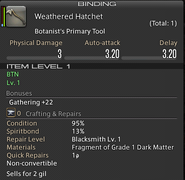 A Hatchet must be equipped in order to harvest.