Verdant flatland broken by patches of sky. Well-preserved ruins dot the plain, attestation to an ancient civilization that survives to this day.

The Bosco Pampa is the first location that the party heads to after they reach Lemurés in Final Fantasy XII: Revenant Wings.

The derelict-now known as the Galbana-brings Vaan and his friends to the legendary sky continent. What wonders await them on its many islands?

After arriving on the Bosco Pampa, the party runs into Llyud, an aegyl, surrounded by three Antlions. After saving him they find that his companion is in trouble.

After saving Llyud and his friend from the beasts, the party asks Llyud about the Sky Pirates on Lemurés and he tells them that they search for auracite. Llyud then guides the party to a temple that guards a great loot of auracite, the Fane of Gucuma Qul. 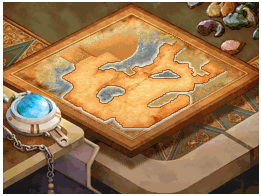 A colony of antlions infests the peaceful Bosco Pampa. Even the aegyl are baffled by their sheer number - far more than chance would bring together in one place. Could this be the work of sky pirates?

A horde of Antlions swarm the map, ruled by the dangerous Antlion Queen.