Rikku: It figures we’d run into something like this.
Paine: It comes!

"A fiend that protects the sphere in the Gagazet ruins. He halts his prey with a sticky web before attacking. Maybe he's as scared as you..."

Bite, Sticky End
Nothing to learn

"A fiend living on Mt. Gagazet. He halts his prey with a sticky web before attacking. During battle, he grows progressively stronger, a vile breach of etiquette."

For the first encounter, Boris is fairly strong, as he can inflict around 50 damage per strike. His Sticky End attack can inflict the Stop status on the party.

It is best to have two party members in attacking-type dresspheres (such as the Gunner and Warrior) and the third as a Songstress who should continually use Darkness Dance. If a Warrior knows the abilities Flametongue or Liquid Steel, those could also be used.

In Chapter 3 and later, Boris has become obsolete and usually dies from the first attack.

Boris is one of the strongest fiends that available for capture during the early part of the game, It capable of learning Ailment Def. (blocks all negative status effects) and Total Limit Break which allows its to access HP and deal damage over 9999 points, Its unique attack, Spider Bite, can pierce through physical defense.

A notable Boris was a trickster who messed with the Gullwings' heads by claiming to be attacked by various fiends just to get Shinra's attention. On the day he was let go, he did get attacked by a Behemoth and was saved by Shinra. 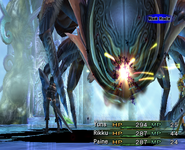 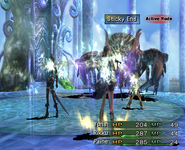 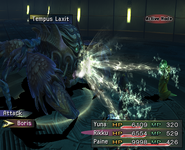 Tempus Laxit
Add a photo to this gallery

[view · edit · purge]"Boris the Spider" is a song by The Who. Its Sticky End attack and the end of his bio are taken from the song.

Retrieved from "https://finalfantasy.fandom.com/wiki/Boris_(Final_Fantasy_X-2)?oldid=3324496"
Community content is available under CC-BY-SA unless otherwise noted.