I'll be waiting for you in Hell!

Borghen, also known as Borgan, is the tertiary antagonist of Final Fantasy II. He was once a noble man who became an evil general. A man with cowardly traits, he lets others do his work while hiding behind those stronger than himself. In the Spanish localization for Dawn of Souls, Borghen name is written as "Borguen".

Borghen is short and chubby with a red nose and hair, and a squat face. Owing to his implied noble heritage, he wears fancy clothes: striped trousers, a cape, a red tunic with medals, gold gloves, and an oversized trifoil cap.

Borghen is a coward, yet ambitious and sadistic. He prefers to stay in the sidelines letting others do the dirty work for him.

His cowardly nature drove him to betray Fynn and the Wild Rose Rebellion. When pushed into a corner, he is a ferocious fighter, as he attempts to fight the Wild Rose Rebellion at the Snow Cave despite knowing he has little chance of winning, and even engineers a death trap in the event he is killed to ensure the party's demise by his hand regardless. He knows he'd be executed under the Emperor's orders due to failing to retrieve the Goddess's Bell and thus had nothing left to lose.

Borghen is ambitious, as while demanding the enslaved Bafsk denizens to continue working, he implies that the Dreadnought's completion will bring him glory (with the PS version specifying that such would advance in his status within Palamecia's army). He blames the Wild Rose Rebellion for ruining his standing with the Emperor and is contemptuous of his own forces, feeling nothing for the people of Bafsk whom he enslaves.

Borghen is sadistic, as he, or rather, his undead form, makes clear he not only intends to torture Josef for eternity by constantly killing him, but doing so would fully please him.

Borghen once served Kashuan as one of the nobility, Scott referring to him as "Count" Borghen. He became a traitor upon the approach of Palamecian forces, ensuring that the empire took Fynn. He abducts Josef's daughter Nelly to blackmail him for helping the Wild Rose Rebellion. Borghen replaces Leon as head of the construction of the Dreadnought though is generally seen a poor substitute, mainly due to his greedy nature and inability to control the workers' minds. After the Dreadnought's completion, Borghen is presumably demoted.

Borghen heads to the Snow Cave to find the Goddess's Bell before Firion and the others do. Realizing if he returns to the Emperor empty-handed he would be executed, Borghen tries to ensure Firion and his party will die. Though easily defeated, the dying Borghen sets off a boulder to roll down the entrance slope toward the heroes, killing Josef. The Emperor's forces never mention Borghen again, showing how little they cared for his services.

Borghen returns as a zombie guarding a treasure chest in Pandaemonium. He is easily defeated, especially compared to the other monsters in the area.

Borghen returns as a zombie in the Unknown Cave, the passage leading to Arubboth. He delights in the idea of being able to repeatedly kill Josef for eternity, but Josef, Minwu, and Scott defeat him. The Emperor's "Light" half mentions Borghen a final time while tempting Josef, Minwu, Scott, and Ricard with promises of eternal life.

The party fights Borghen when trying to take the Goddess's Bell, but he is no real challenge. He is also fought in his zombie form in Pandaemonium and in the Unknown Cave; both forms are also easy to defeat.

Borghen is an enemy during an event called "Showdown". In battle, Borghen uses Attack.

Borghen: FFII is one of free ability cards given before End-Of-Service in Mobius Final Fantasy (Japan). The buffs given upon are Brave, Boost, Snipe, Haste and Berzerk.

Borghen appears as a boss.

Borghen appears on a card.

Borghen's character design shares similarities with Napoleon Bonaparte, who acted as an emperor himself.

In the novelization Final Fantasy II Muma no Meikyū by Kenji Terada, Borghen is a Black Mage and hails from Salamand.

Before dying, Borghen tells the party he'll wait for them in Hell. This foreshadows the battle against his zombie form inside a chest in Pandaemonium, which is the castle of Hell in John Milton's epic poem Paradise Lost. The one person Borghen successfully kills ends up facing him in Raqia, the equivalent of Heaven.

In the Pixel Remaster versions of Final Fantasy II, Zombie Borghen has a field sprite that goes unused, as he never appears in the field in this form and the Soul of Rebirth quest is not included in the game.

In the Final Fantasy Origins and subsequent versions, Borghen laughs whenever present, notably while gloating about the Dreadnought being complete, just prior to fighting the party at the Snow Cave, and in his death throes. He is one of the few characters in games without voice acting to have a laughing sound clip (the other characters being Kefka Palazzo in Final Fantasy VI and Ultimecia in Final Fantasy VIII). 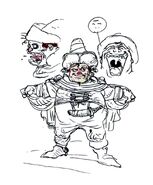 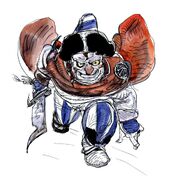