A boomerang made of wood. This tool for hunting wild game was initially used to lure out animals by threatening them. It draws an arch in the air as it is thrown and eventually returns to the hands of its owner, allowing him or her to attack foes from a distance. The boomerang is currently used to fluster opponents who excel with close range weapons, such as swords.

The Boomerang is the weakest thrown weapon that Edge can equip. It can be bought at the Agart and Cave of Eblan for 3000 gil and has an Attack of 20 and an Accuracy of 30. It possesses the throw element and is a long range weapon. Edge is the only playable character that can equip thrown weapons.

In the Easy Type version, its hit rate was increased to 40%.

The Boomerang has an attack power of 8 and an accuracy of 30%. It can be bought in Eblan and Mysidia (Edge's Tale) for 150 gil. It can be equipped by Edge, Gekkou, Zangetsu, Izayoi, and Tsukinowa.

The Boomerang is a low-rank weapon with an attack power of 102 and its considered a long range weapon. It can be bought in Tzen (WoB), Maranda (WoB), and Narshe (WoB) for 4500 gil. Locke Cole is the only character that can equip it.

The Boomerang is a weapon for Yuffie. It has an attack power of 30, Atk% of 101, and grants 7 to Magic. It can be bought in Junon (disc 1) and Gongaga Village and stolen from Formula on the world map in the Junon Area. The weapon is considered Long Range and has the Shoot element.

Boomerang is a throwing weapon that provides 11 damage and 294 delay. It deals 2.24 damage per second and accumulates 77 TP per hit. It is returning Weapon that, when used, performs a ranged attack and returns to the user's hand. It can be equipped by level 14 Warrior, Thief, and Ranger.

Boomrng has an boomerang icon before its name. It has an attack power of 40 and can be bought for 2400 G at Viper in the Future.

The Boomerang is a level 22 throwing weapon that adds 19 to Attack and decreases base Bravery by 17.

Boomerang is a Throwing weapon that provides 16 ATK and +50% physical damage against Birds. It can be bought for 200 gil at Port City Lodin, crafted using 40 gil and x3 Lumber, or found at Dalnakya Cavern. 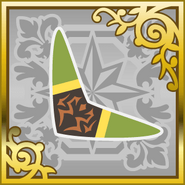 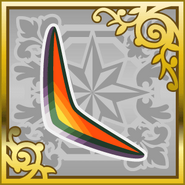 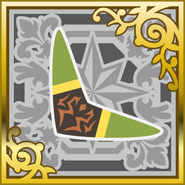 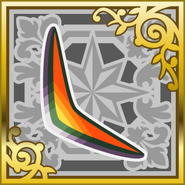 [view · edit · purge]A boomerang is a thrown tool, typically constructed as a flat aerofoil, designed to spin about an axis perpendicular to the direction of its flight. A returning boomerang is designed to return to the thrower. Boomerangs have been historically used for hunting, as well as a sport and entertainment.