Bonecrusher is a Technick that sacrifices the user's HP to kill one targeted foe instantly, however, there are chances of failure and bosses are immune to it. If Bonecrusher misses, the user will get KO'd. The Technick costs 30 LP. It is bought for 700 gil in Rabanastre after defeating Judge Bergan, and in Archades.

The damage sustained by the user is:[1]

In the Zodiac versions, Bonecrusher is used by five job classes: the Machinist, Monk, Bushi, Shikari and Uhlan. The Uhlan and Shikari must first acquire the license for the Esper Hashmal. Reddas also joins as a guest knowing it. The Technick is found in the Henne Mines Phase 1 Dig.

Deal damage equal to own maximum HP when critically wounded.

Bonecrusher (also known as Meatbone Slash) is a reaction ability the Samurai class learns for 200 JP. Once the unit is in HP Critical condition, the user will counter any damage, dealt by either direct, ranged or magic attack, with damage equal to the unit's max HP, as long as the user survives after the attack and the opponent is within the user's weapon range.

Bonecrusher is a reaction ability for the Fighter and Templar job classes. It functions somewhat as a upgraded version of Counter, where the unit retaliates with a counterattack damage of x1.5, but requires that the unit actually take damage from an attack before activating.

Bonecrusher is an ability of the Ravager, Fighter, and Templar job classes. However, only normal attacks can activate Bonecrusher, no other abilities will work to activate it.

Either makes self impervious to normal attacks or take heavy damage and fiercely counter attacks until the next turn.

Bonecrusher is a Fusion Ability that makes the user evade enemy attacks and counter. It is exclusive to the Warriors of Darkness and costs 1 MP to cast. Bonecrusher requires the character to have Monk's Riposte and Dark Knight's Darkness mastered.

Bonecrusher is an ability available from the Rebellious Soul accessory. It increases Brave by 30% of max HP when Near Death. 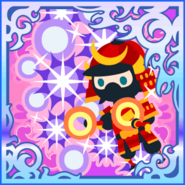 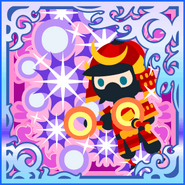 The Japanese name derives from the phrase "皮を切らせて肉を切り、肉を切らせて骨を切る" which literally translates "when the skin is cut, retaliate by cutting the flesh; when the flesh is cut, avenge by crushing the bone".