Bomb forest is a term used to describe a location in Final Fantasy VI notably populated by Bombs. This huge forest is located directly west of the Veldt across the river, and directly south of the Phantom Forest across the mountain range. This forest is isolated from the rest of the world as it cannot be reached by walking nor with a chocobo; the only way to get there is with the airship.

This is the only place to encounter Grenades in the Super Nintendo and PlayStation versions of Final Fantasy VI. In these older versions, if the player misses encountering the Grenade, the player will never encounter it on the Veldt and Gau will never learn the Grenade Rage. In the Finest Fantasy for Advance and following versions, Grenades can be encountered in the Soul Shrine. 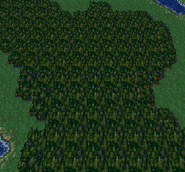 The Bomb forest in the World of Balance (SNES).

Fighting a group of Bombs.