Arm of a bomb turned to coal, its fire ideal for roasting meat.

A Bomb Crank, also known as Bomb Arm (ボムの右腕, Bomu no Migiude?) or Big Bomb, is a recurring item in the Final Fantasy series.

Has the same effect as Fira

Bomb Arms (and the related Snoll Arm) are used as crafting materials, and act as a rudimentary grenade. The Bomb Core is an item obtained from Notorious Monster "Friar Rush" which increases attack when equipped.

Bomb Crank is a high-ranked Volatile Compound that can be Scavenged from Strange Liquid on Muruc Cahuac Skysea and Arda, Heaven's Pillar or bought at the Sky Saloon in Chapter 6 for 570 gil (5% discount). It can be used to craft Hornito, Lava Wand, Fumarole, Laevateinn, Caldera, and Tumulus.

The right arm of a bomb, a creature that went extinct back in the Age of Myths. It has been completely mummified and a cursed sigil placed on it. It has the slight smell of gunpowder, but its effect is guaranteed.

Bomb Arm can be compounded by mixing together Phlogiston + Phlogiston.

A remnant from the body of a self-destructed bomb. While bomb fragments are commonly seen, fully-intact arms are rare indeed, and naturally prized for the fiery havoc they can wreak on foes. Overeager adventurers looking to procure this treasured item by their own hand have been known to meet an explosive end. 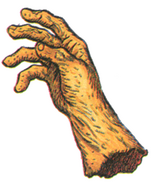