The ghostly, inexplicably heatless flame from the heart of a bomb.

The Bomb Core (ボムの魂, Bomu no Tamashī?), also called Bomb Spirit, is a recurring item in the Final Fantasy series often acquired through enemies like Bombs. It often inflicts heavy Fire-elemental damage or heavy non-elemental damage to all enemies, or otherwise acts like Self-Destruct, killing the user to damage enemies proportionally to their HP.

Bomb that causes damage in exchange for the user's life

The Bomb Core inflicts damage equivalent to the user's HP.

Bomb Spirit teaches a Guardian Force the Kamikaze ability and refines into 100 Firagas. It can be mugged from Bomb (H) and made from 20 Bomb Fragments.

Deals fire damage to an enemy.

Bomb Core is an electrical component that can be acquired from Cryohedron. It has a base EXP value of 551 and Multiplier Value of -71.

Mothers of All Bombs. The quest's objective is to obtain 3 such cores dropped by Breeding Bombs in Outer La Noscea.

Bomb Core is one of many Monster Spoils items, and functions differently to its other appearances. The description of Bomb Core is "said to contain a bomb's soul", and it grants Aura and Trance on uses. All Bomb enemies drop it on death, and it sells for 300 gil. 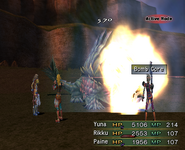