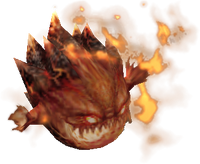 Bomb (ボム, Bomu?) is an enemy family in Final Fantasy Type-0. It has three variants and three enemies.

A floating cluster of flames, the bomb grows larger with every attack it incurs. Once it reaches critical mass, the bomb will self-destruct. However, the fiery fiend will also telegraph its explosion, providing the enemy with an opportunity to strike. Bombs also bite and spit fireballs at their targets, and the Concordians have harnessed the latter ability by using the creatures they call "pyronades" as stationary cannons.

Some travelers also report having encountered a larger species of bomb known colloquially as the "lavaball."