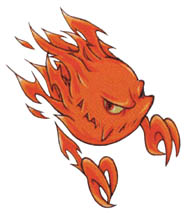 Bombs in Final Fantasy Tactics Advance are flaming creatures that can self-destruct to do massive damage. Being of the Fire element, they are weak to Ice and Water-based attacks. They are related to the Grenade enemy, which is of the Ice element.

If Firewyrms accompany Bombs, such as in "Mission #047: Hot Recipe", kill the wyrms because they may use their Fire Breath attack to deal damage to the party and heal an injured Bomb at the same time.

Retrieved from "https://finalfantasy.fandom.com/wiki/Bomb_(Tactics_Advance)?oldid=3219903"
Community content is available under CC-BY-SA unless otherwise noted.